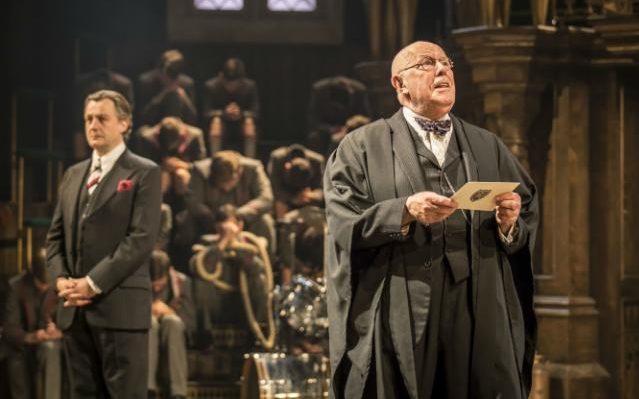 The estimable Richard Wilson is an octogenarian. That is worth remembering when you see this much-loved actor’s portrayal of the patriarchal headmaster in Forty Years on, currently being staged at Chichester Festival Theatre.

The man who forever and a day will be most well-known for his characterisation of Victor Meldrew, the grumpy pensioner in BBC comedy One Foot In The Grave famous for his oft-spoken refrain “I don’t believe it”, is 81 in July. So, to deliver the level of paper-shuffling performance such as he does in Alan Bennett’s is entirely admirable.

And to think not so long ago he was convalescing after being hospitalised from a cardiac arrest and sustaining a nasty head injury after a fall. Here he is back on his feet, and in fine form. 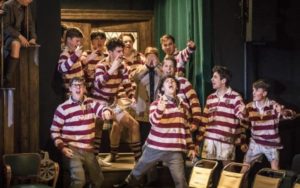 The year is 1968, the setting is Albion House, a dog-eared public school (imagined not a million miles from the CFT tucked away in the South Downs). The headmaster is calling time on his career and this is his last day. But he’s not getting off lightly as before he hangs up his mortar board, he must appear in the school play.

But, as you would expect from the pen of comedic genius Bennett (witness classics such as Talking Heads, The History Boys and The Lady in the Van), there is a snag, in the shape of the script. And the small, though not insignificant fact, that he hasn’t read it!

What follows sees satire abound as the cast set about delving into various facets of the English condition, most notably nostalgia and distinctiveness in what is the debut production under the stewardship of Daniel Evans, the CFT’s new-ish artistic director.

Wilson, and this production, is definitely worth seeing. Yet the loudest hurrah come the curtain call wasn’t afforded to national treasure Wilson, rather to the 50 or so local children who provided a meritotious chorus in what is a production certainly worth seeing. Oh, and the stage set is especially convincing, too.

FORTY YEARS ON
By Alan Bennett
21 April – 20 May
FESTIVAL THEATRE
Tickets: From £10

Review: Flowers for Mrs Harris is a bloomin’ triumph at Chichester Festival Theatre