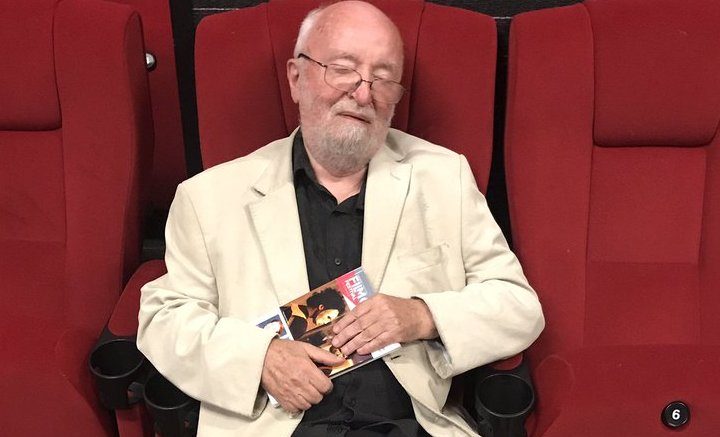 Roger Gibson is celebrating the success of the Chichester International Film Festival after the curtain came down on the city’s movie fiesta.

Artistic director Roger, pictured taking a “nap” at the conclusion of a busy August, was speaking following news that attendances soared for the 26th festival.

It has been staged at five venues in the city and was based at Chichester Cinema at New Park. The event screened 150 films from more than 30 countries.

He said: “With the fall in UK cinema admissions this summer, it is heartening to announce that CIFF has bucked the trend with a 10 per cent increase from last year’s festival with almost 7,000 admissions over the 20 days.

“We were delighted to have one of only two national screenings of The Square, the 2017 Palme D’Or winning film prior to its withdrawal for editing and distribution in March 2018.”

Film awards, announced by Gibson on 27 August before the screening of France’s heart-warming Back to Burgundy, the festival’s gala closing film, included Belgium’s Insyriated, a Syrian-set war drama winning the premiere-rreview top spot, the UK Premiere.

An Inconvenient Sequel: Truth to Power, Al Gore’s follow-up to his climate-change film a decade ago won the documentary category, Phil Grabsky’s David Hockney at the Royal Academy of Arts, taking second place. The low budget indie section was won by The Shepherd, a compelling drama of changing Spain.

Walter Francisco, Chichester Cinema at New Park’s manager who oversees the festival thanked audiences who “came in their droves from even further afield this year”, adding: “Our high-quality red new seating getting the thumbs up, our thanks also to the invaluable volunteers and not least our sponsors, University of Chichester, Greenwood and the British Film Institute. What a year to remember!”