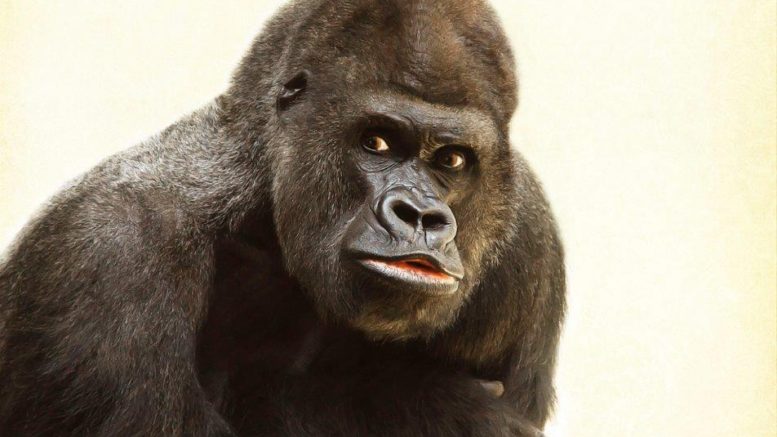 Part One. The Ape:  Years ago I was approached to by an ex-Disney world PR consultant. He had been invited by a major zoo to help them with things such as entertaining the queues of children waiting to see a real live polar bears fighting or involve them with interactive spectaculars like elephant races or kissing killer wales.

He felt that the landscaping around the grounds needed attention which is why I found myself in a meeting with a group of highly experienced zoo keepers. We had just got under way when there was a knock at the door and a man in a white coat popped his head round the opening, apologised for disturbing the assembly but felt we had to know that Gary the gorilla had just unscrewed his tree. There was a note of apprehension in his voice. Three of the senior keepers wasted no time and scrambled off to sort it out and I went with them.

Gary had been busy gardening and the keepers were infuriated. ‘It’s the third time this month.’ one exasperated keeper moaned. I assumed the keepers were talking about a tree in the garden of the great ape’s living quarters, and that he must have developed a habit of pulling it out of the ground. Invited to join the party who were setting off to try and save the tree I was looking forward to meeting a legend in the world of monkey business. 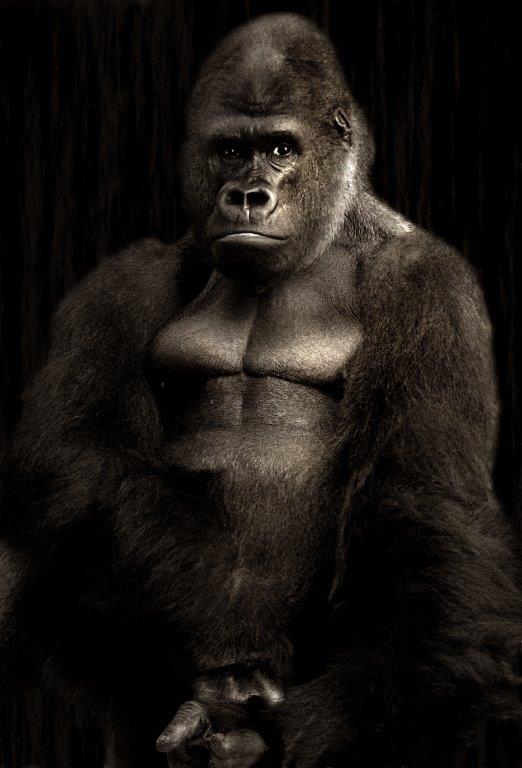 A powerfully built internee with a large head and short neck, found in the forests of central Africa, Gary had long since resigned himself to being an exhibit. He was sitting crossed legged twiddling his thumbs clearly bored with his lifeless tree that the keepers had supposedly planted for his pleasure. But hang on, the tree was plastic and Gary had quite literally put his powerful hands around the trunk, turned it anti-clockwise several times, pulled it off the giant screw that held it in place and contemptuously thrown it in the corner.

Looking at the scraggy excuse for a tree I naively asked why they didn’t give him the real thing, a capacious leafy tree with a bushy crown that would supply a little shade for him to sit under or perhaps even climb up?

“Because,” his keeper told me, “he would have the leaves removed in three minutes and the bark peeled off in ten – with the inner pulp giving him indigestion.” “So instead he gets well fed by you but is bored senseless?”

“We care for him properly,” said the keeper looking at me as if he wanted to click his fingers and have Gary to make me disappear. Then more calmly he said, “An abundant green vegetation is the main characteristic of the gorilla habitat and an adult male may consume more than 18kg (40lbs) of vegetation a day and even if we cropped the vegetation in a manner that allows for quick replenishment to occur he would need to have at least four acres at his disposal and be able to move an average of a kilometre a day to forage, further if they know of a particular tasty little forest. Gary is in captivity but he is not neglected.” 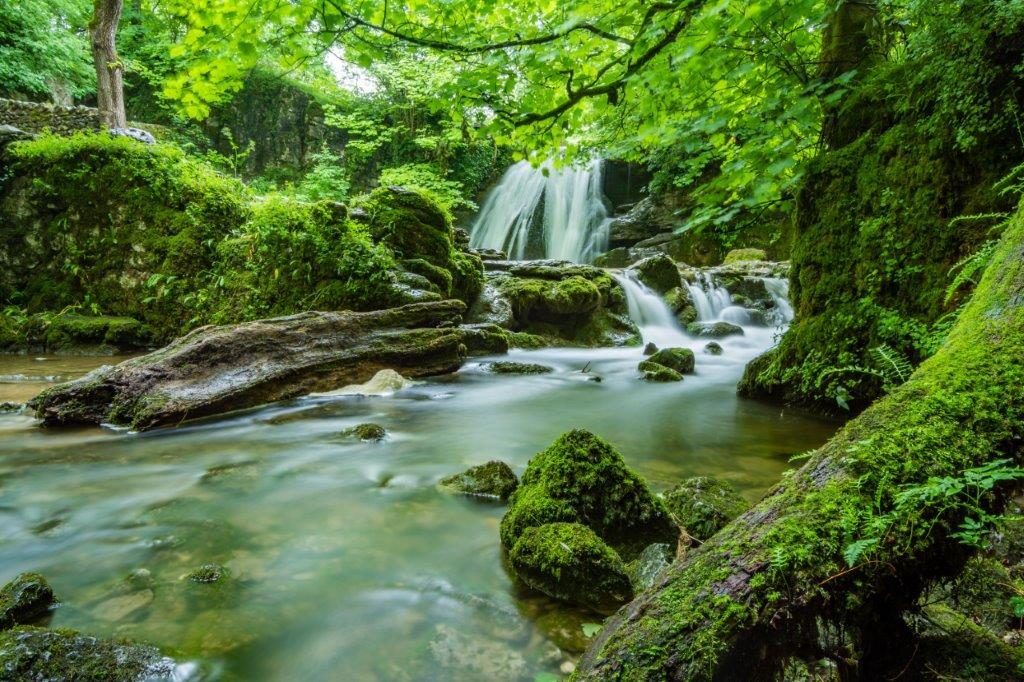 “I understand,” I said adding blithely, “But there doesn’t seem to be much for him to do. Is there any evidence that captive apes are having a positive effect on their wild relatives, what with his tissues being harvested for research and his sperm extracted to help diversify the captive breeding gene pool.”

“You almost sound like you know what you are talking about. You been researching?” It was the other keeper. The one that looked as if he was a close relative of Gary. I had as it happens, been researching. Knowing I was going to be in a wild animal environment I had done a bit of investigation.

“Do any primatologists admit to feeling uncomfortable at the sight of a captive ape on display, no matter how luxe or ‘natural’ the zoo exhibit may be? Can you really justify keeping great apes in cages,” I enquired knowingly.

The keeper turned to me and said, “I could justify keeping a gorilla in a beehive if I had to. Okay?”

“Gottcha!” I answered and smiled sweetly.

“Bob, why don’t you take Alex to the snake house, show him the Inland Taipan while we sort out Gary’s broken tree?”

“Why the inland Taipan?,” I asked Bob as we headed for the snake-adrome.

“Because it has the most toxic venom of any land snake in the world. One bite is enough to kill about 100 humans, or 250,000 mice! It is 50 times more venomous than the common cobra and can potentially kill a human within 45 minutes.”

“Aha! I can see where Gary’s keeper is coming from.”

‘The venom,” Bob, looking at me sinisterly, went on “quickly induces muscle paralysis followed by a period of massive over excitation (cramps, tremors, spasms) Even if a patient makes it to a hospital, permanent coma and even brain death from hypoxia may well occur.” At that Bob started showing me photographs of various hapless victims in hideous stages of decay. “Do ya wanna see some killer spiders?”

“No thanks Bob. But maybe a few roses or a honeysuckle might cheer me up.”

The morning ended on a happy note of agreement. I wouldn’t do any landscaping at the zoo and the keepers wouldn’t have me killed. With a quick thumbs up to Gary I was out of there like a cheetah on heat and I wasn’t rushing off to a safari park either where, for forty quid plus life insurance, you can sit quivering inside your four-wheel drive tin can as a monkey rips off your wipers, pees on your windscreen and scratches the paintwork whilst watching a lion (another dollop of dollars for big cat insurance) trying to chew the rubber off your wheels. 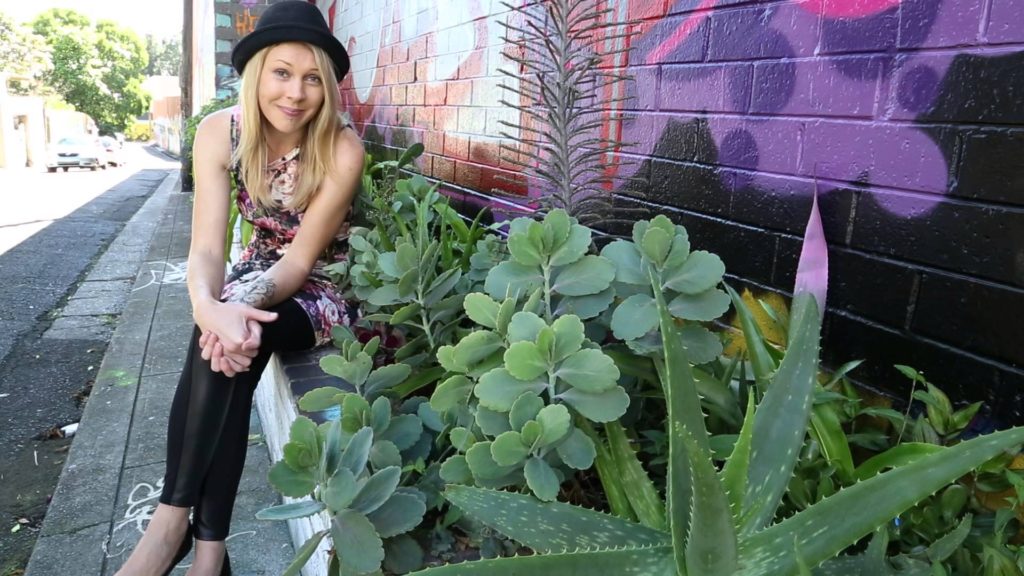 The Soldier. A guerilla gardening soldier that is. This is the gentlest, most heart-warming and generous way of bringing a little peace and amusement into everyday life. This is when you garden on land that you do not have the legal rights to cultivate, such as abandoned sites, areas that are not being cared for, or don’t belong to you.

It encompasses a diverse range of people and motivations, stretching from regular gardeners who allow their plants to creep out of the home limits to those that want to challenge authorities by using guerrilla gardening as a form of protest; to draw attention to the wastelands of public places, hoping to reclaim land that is perceived to be in neglect or misused and give passers by an excuse to stop and think. There is almost inevitably an underlying radical purpose to…