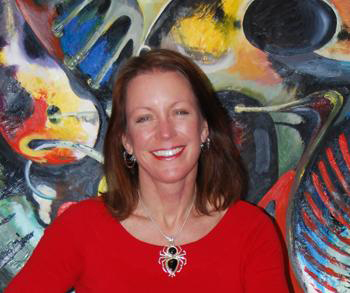 Frieda Hughes, an artist who created 400 paintings in as many days, is set to exhibit her incredible body of work at Chichester Cathedral.

The amazing 400 Days exhibition, entry to which is free and which can be seen in the Cathedral’s North Transept, opens on Wednesday 14th June to Thursday 17th August.

Artist and poet Frieda decided to try to create a painting every day for a year, in 2015, with the subject an abstract visual diary; with colour, shapes, events, moods and her own appearance inspiring her work.

It means that for 400 days, when others were going to bed after a hard day’s work, or a busy night, Frieda would shut herself in her studio until the early hours until her painting of the day was finished. 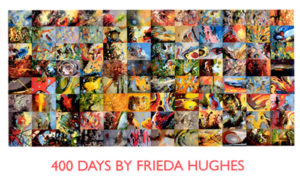 And by the end of 2016, it is said that “other work was being neglected, friendships were being tested, and sleep deprivation was beginning to take its toll”. This, too, is reflected in the paintings. The daily paintings had become the non-negotiable daily task that they needed to be in order for the project to reach completion.

Then, on New Year’s Eve 2016, Frieda completed the last canvas in the series. As well as her paintings, visitors can observe and digest ‘Alternative Values’, which is a collaboration between 60 of Frieda’s poems and her artwork.

*Frieda was born in London in 1960, grew up in Devon, and after living in various parts of England and Australia now lives on the Welsh Borders. She has published seven children’s books and in has published four other poetry collections.