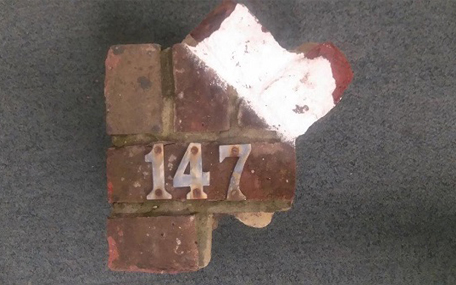 The number was definitely up for fly-tipper Darren Perry when he dumped bricks showing a house number that led to his capture.

Perry illegally discarded bricks in Tangmere and has been fined after he was traced thanks to pictures which were posted on social media.

He was caught after an eagle-eyed resident spotted the snaps on Chichester District Council’s Facebook page. They recognised the bricks as part of an arch which was demolished in January. And the number of the house was still attached.

Perry was interviewed under caution and admitted the offence and agreed to pay a Fixed Penalty Notice of £250.

Chichester District Council Louise Rudziak said: “In the last three years, the council has spent more than £142,000 clearing away illegally dumped waste. What some people may not realise is that everyone, including both householders and businesses, is responsible for making sure waste is disposed of safely and legally.

“If you have not taken all reasonable measures to ensure your waste is being disposed of legally and you give your waste to someone who is not authorised to take it or your waste is fly tipped, you could be prosecuted or liable to pay a Fixed Penalty Notice as well as the fly tipper.”

She went on to say: “We didn’t think we would be able to find who was responsible for this particular incident, but because the number was still attached to the bricks we decided it was worth posting on our social media pages. I would like to say thank you to everyone who helped by sharing these posts and providing valuable information.

“We would like to advise all householders and businesses to check that their waste is disposed of properly. If it is disposed of by a friend or relative, check that it is actually taken to the local household amenity site or if paying an individual or a company, that they are registered with the Environment Agency to remove waste.”