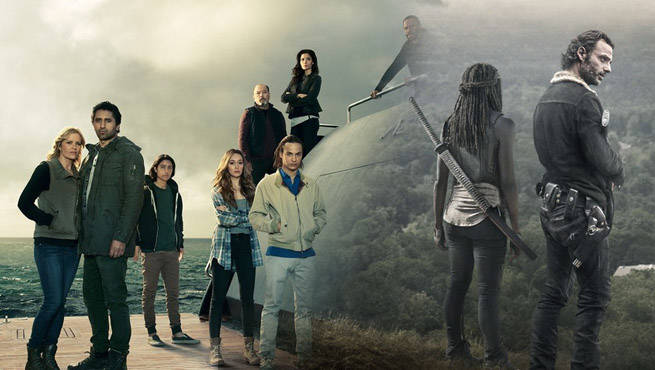 The worlds of The Walking Dead and Fear the Walking Dead will collide…despite show chiefs adamantly denying any possibility of a crossover when Fear first started.

At New York Comic Con’s Walking Dead panel, the information was revealed that a crossover between the two shows will occur within the next year.

The Walking Dead (TWD) is one of the most popular shows on TV, so when the news broke back in 2015 that a spinoff show would air it made sense, the original show was doing well so let’s expand on this world we’ve created was the initial thought.

Whilst TWD follows a group of survivors after the outbreak has decimated the world. Fear takes place during the period TWD’s Rick is in his coma, and follows two families at the outset of the zombie apocalypse. One takes place in Georgia and the other LA so how will a crossover work?

We could get some previous backstory of a popular TWD character, say Negan…Or we could see a Fear character pop in TWD show and see a future version of that character…who knows.

Here is my guess: You all remember Morales? Probably not. He was part of the Atlanta group that Rick first encounters after being rescued from the tank by Glenn, still with me? Later in the first season, before the group head off to the CDC, Morales leaves in a separate car with his family never to be seen again.

My guess is that he’s going to show up on the other side of the country in Fear. I’m probably going to be wrong but that’s what fans do, we speculate.

On the other hand, Madison of Fear is from Alabama which is the most geographically realistic option to merge the two shows.

Why are they doing this crossover you may be wondering, considering Kirkman said it would never happen as they wanted the two shows to stand on their own. My guess is that ratings have been significantly lower for Fear since its first season, and many people stopped watching TWD after its lacklustre seventh series, which saw a controversial opener. How do you boost ratings? Crossover.

The Walking Dead returns for its eighth season, with the 100th episode airing October 23rd on FOX. The buzz about the crossover could help boost fan interest in season 4 of Fear, with its third season coming to an end October 15th.