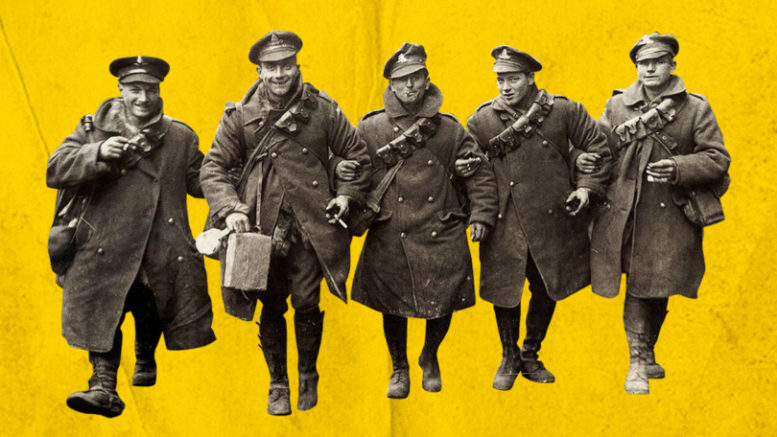 Ian Hislop is no stranger to satire. In his role as editor of satirical magazine Private Eye he oversees and helps to shape a publication which irks those who need irking. No one is safe; power-brokers, politicians, public figures, celebrities and, well, anyone who needs irking — you get the picture.

And so it is quite fitting that Hislop, probably best known as a long-standing figure on BBC2’s Have I Got News For You, should co-write (with Nick Newman) The Wipers Times, currently showing at Chichester Festival Theatre.

The Wipers Times (so-called because British troops mispronounced the Belgian town of Ypres) is said to be a forerunner of Private Eye yet, quite understandably, the satire created from those at the front line in France and Belgium is far more powerful.

The magazine, produced amidst sniper fire, bomb blasts, gas attacks and whizz-bangs, came about when two officers and Tommies in their command discovered an old printing press and set upon the idea of entertaining the troops with what was a most unlikely publication.

The magazine drew on the darkest of humour from those poor, entrenched souls trying desperately not to sacrifice their lives to gain a few feet of quagmire as they advanced on the enemy, the “sausage-eating” Germans.

As WW1 dragged, interminably, to its catastrophic conclusion (victory aside) in terms of loss of life, the editors, sub-editors, contributors and production team fought for their own lives while also producing the magazine. It was hugely popular amongst those it relied on for copy and, begrudgingly sometimes, admired also by the top brass.

What isn’t in doubt is how much the mood of the battle-weary troops was lifted by the pages of send-ups, poetry and mock adverts. One spoof correspondent was Teech Bomas, a favourite scribe among his readers. He was based, of course, on famed war reporter William Beach Thomas — his Daily Mail reports from the Western Front were devoured by the nation, but also the subject of merciless parody from the editorial staff.

The Wipers Times is packed with polished performances; full of laughter, song and no lack of poignant reflection. The touring company who have brought the production to Chichester (it is here direct from a record-breaking West End season) deserves more than a mention in dispatches.