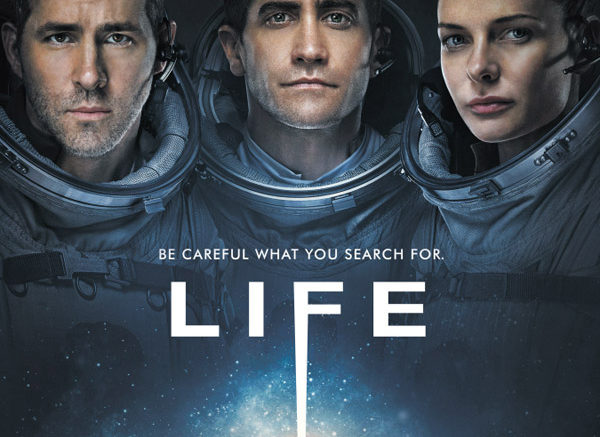 Life. Rated: 15 Starring: Jake Gyllenhaal, Rebecca Ferguson, Ryan Reynolds In space no one can hear you scream…again! Life follows the story of six astronauts working on the International Space Station, who recover some crucial samples from Mars and begin to study them. What they soon realise is that the thing they discovered is a rapidly evolving life form that threatens the crew and all life on Earth.

What I liked about the film was the performances from the crew, particularly Jake Gyllenhaal and Rebecca Ferguson, both fully committing to the roles convincingly conveying multiple emotions such as desperate panic and heroic sacrifices. I would consider these two as the main characters, however the supporting cast do a fine job, Ryan Reynolds bringing his usual comedic wit to the character.

The location allowed for some thrilling set pieces, the confined areas of the space station created some very tense moments, meaning the first half of the movie felt like a claustrophobic horror. It is hard not to compare this to Ridley Scott’s Alien, but the first half of the movie did a good job of trying to recreate some of the edge of your seat moments from the classic space horror.

However where this film lost me was the second half. It went from claustrophobic horror, where you were always on edge as you didn’t know where the creature, or Calvin as it was named, was, to generic monster movie. The first half of the movie did so much to build up Calvin as a life form that kills because it needs to survive, then swiftly changed its motivation to kill because it can. That meant, for me, it felt like two different movies.

Overall, I enjoyed this film, the first half was very tense and produced some truly nail biting moments, specifically with Ryan Reynolds and his flamethrower. However, the sudden change to a standard monster movie meant it lost some of its intensity and became slightly predictable. The twist ending was a nice idea but I spotted it a mile off, but that might just be me.

What a year for cinema! Join Josh Burford as he counts down his top 10 best movies of 2017