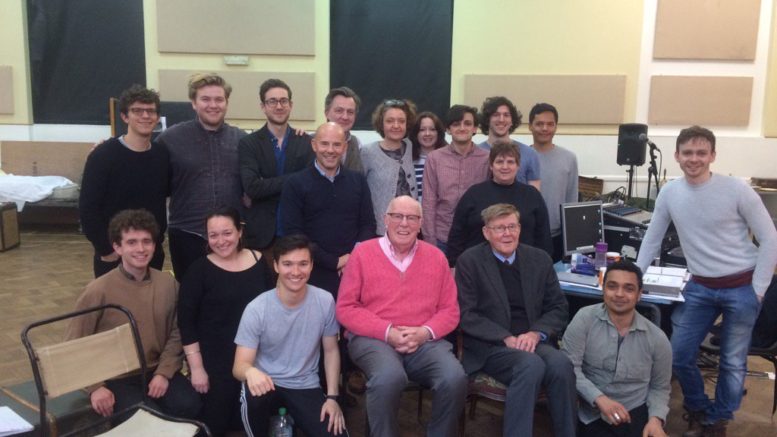 Whether he likes it or not (and, more than likely, it’s a “not”), Alan Bennett is most definitely a national treasure.

So when the octogenarian playwright dropped in on rehearsals of Forty Years On, to be staged at Chichester Festival Theatre next month, it is easy to forgive Daniel Evans, CFT artistic director, for being a tad excited. And though star-struck might be too strong a term (though perfectly justifiable), an utterance of “living legend” from Evans provides some context to the import of the visit.

Of Bennett’s visit to the rehearsals in London yesterday, Evans said: “We were privileged to have a visit from our esteemed playwright, Alan Bennett, yesterday. Forty Years On was first staged nearly 50 years ago and Alan regaled us with wonderful stories of the original cast, which was led by John Gielgud.

“The actors playing schoolboys gave Alan a rendition of one of the pieces of music from our production, which left him beaming. We all felt incredibly lucky to have spent some time with this living legend.”

Actor Alan Cox, set to play Franklin in the play, took to Twitter to post a snap and tweet: “Alan Bennett came to rehearsals today, which was, of course, beyond a delight.” 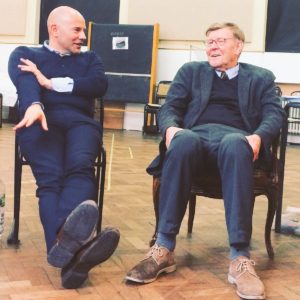 Forty Years On is part of Festival 2017. The company will be led by Richard Wilson as the headmaster. Having directed FRACKED! for Festival 2016, the much-loved star of TV’s One Foot in the Grave appears as an actor at Chichester for the first time.

Pictures from the Twitter accounts of Daniel Evans @DanielEvansCFT and Alan Cox @Coxitude.