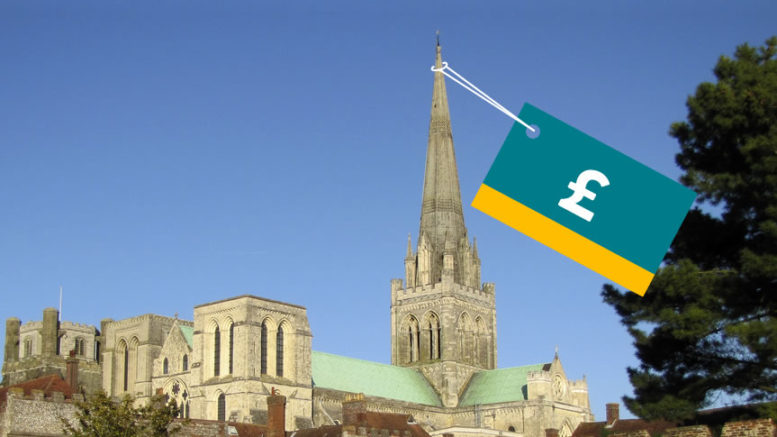 Church bosses have given their blessing to the controversial five-year tie-in which is said to be worth £10million per annum. But they refused out of hand a proposal to adorn the historic cathedral spire with a giant Poundland logo.

Poundland’s German CEO Gott Aquid is delighted with the deal. He said: “I fell joyous, though I would have loved to sponsor a stained glass window and fly the Poundland flag atop the spire. But we’re happy overall.”

Yet the deal has flabbergasted church-goers who are said to be “shocked and saddened” that the powers that be would sanction a move that they say “threatens the very sanctity of all that is holy”.

One outraged Chichestrian, who asked not to be named, said: “I am shocked and saddened that the powers that be would sanction this move. It threatens the very sanctity of all that is holy. We are being taken for fools. Fools I tell you!”

The big bucks deal will see a raft of measures aimed at promoting the Poundland brand in and around the medieval cathedral, as of today, April 1. They include:

• Ending all sermons with the gently sung refrain: “As brought to you by Poundland.”

• Allowing an array of cheap and cheerful goods to be offered for sale in the south transept. All priced at, er, £1.

Despite last-minute protestations from a clutch of Anglican Bishops across the globe, the deal was rubber-stamped at a top secret gathering in city hostelry The Vestry, opposite the cathedral.

The only Bishop to come out in favour of the sponsorship agreement is Dr Lapri Olof, a high ranking church official from Denmark.