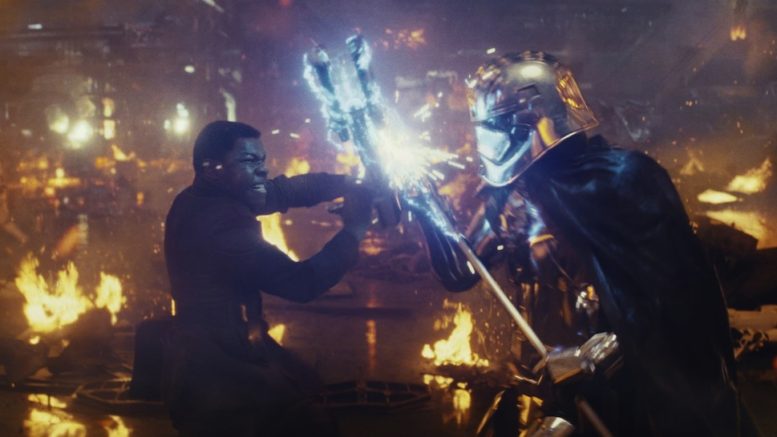 Star Wars: The Last Jedi (12A) picks up after The Force Awakens and follows Leia Organa’s (Carrie Fisher) Resistance fighters as they try to escape the clutches of the villainous First Order. Meanwhile, Rey (Daisy Ridley) has found Luke Skywalker (Mark Hamill) and joins him on an adventure that unlocks the mysteries of the Force and as well as shocking revelations of the past.

This might be the first time I’ve ever walked out of watching a Star Wars movie with mixed feelings. Although there were an abundance of trailers and TV spots released, the film makers did a good job of hiding story details. Where The Force Awakens (TFA) was considered to be a big budget remake of A New Hope it did a great job of capturing the magic of Star Wars. I’m not sure I can say the same for The Last Jedi (TLJ)…it definitely needs a second watch.

I spoke to massive Star Wars fan Mason and he had made up his mind upon first viewing.

He explained: “In my honest opinion, I really enjoyed the film, it felt very different to other Star Wars films, but still had that familiarity and nostalgia value.”

I’ll start with what I liked because there was a lot of enjoyable scenes and plenty of moments to put a smile on your face. Hamill was brilliant as Luke. When we saw him in TFA he was this beacon of hope that everyone sought after. In TLJ he is a damaged man, at first you think he’s just a grumpy old guy but as the film progresses we see that he is still the Luke Skywalker we know and love. I thought he gave a fantastic performance.

I was glad that certain characters received more screen time in this one. Poe Dameron (Oscar Isaac) was heavily involved this time around and he was great. Isaac’s performance was so enthusiastic and energetic, mirroring Finn (John Boyega) in TFA. Isaac was one of my favourite parts about the movie, very funny and likeable.

I was also a big fan of Snoke (Andy Serkis). We see him in the flesh this time, as opposed to just a hologram, and Serkis’s motion-capture performance was great. He was a very interesting character and formidable bad guy.

The action includes some of the best-looking set pieces in the history of the saga. The space battles are a sight to behold, very chaotic and gripping, and one particular lightsaber scene was jaw-dropping. The end battle is also very impressive and tense, as is the Finn/Captain Phasma fight. This film looked beautiful and there is one shot that when I saw it, my first thought was; I need that as a poster or screensaver or something.

There was a lot of comedy in this instalment. Chewbacca and the Porgs brought a lot of the laughs. Don’t worry they are nowhere near as bad as the Ewoks. However, where some of the comedy worked, a good chunk of it fell flat, feeling very forced and unnecessary. Star Wars shouldn’t be a straight up comedy movie!

The writing had its moments. Rian Johnson did a good job of making us feel like characters were in real danger (one scene my jaw literally fell on the floor), but there were a lot of poor writing decisions as well. There were so many moments that just didn’t make sense, making them feel like lazy decisions. Also, a lot of the questions we had after TFA were either not answered or gave disappointing payoffs.

This is hard to say because as a massive fan I want as much Star Wars as possible. However, it was too long. There is a chunk of the story with Finn and Rose (Kelly Marie Tran) that could easily be lifted as it didn’t really have a payoff. I felt like it was just there to give Boyega something to do. There are also multiple characters who are wasted, including; Phasma (Gwendoline Christie) once again, Maz Kanata (Lupita Nyong’o) and DJ (Benicio Del Toro).

Overall, it is still a very enjoyable movie that sends the franchise in a new and exciting direction, but it has a few flaws. I’m not going to give a rating because I need to watch it again as I still don’t know if I liked it, loved it, or didn’t like it as much as I wanted to.