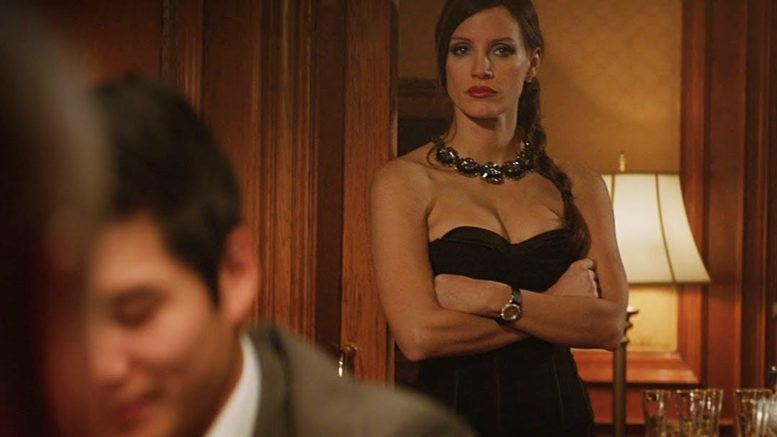 Molly’s Game (15) tells the true story of Molly Bloom (Jessica Chastain), an Olympic-class skier who ran the world’s most exclusive high-stakes poker game and how she found herself part of a federal investigation.

I saw this film in a secret showing at my local cinema weeks before general release, so I went into it blind. I didn’t see a trailer, I didn’t really know what it was about, but I absolutely loved it.

Writer Aaron Sorkin delivers a fantastic directorial debut. His usual fast-talking, sharp and witty dialogue drives the movie. This film moves at such a frenetic pace that you really need to pay attention and absorb every single detail in this fascinating story. Especially in a scene with Idris Elba who delivers a brilliant rant at such a high speed. Very impressive from him.

Chastain was fantastic. She looked great throughout, shout out to the costume department whose outfits helped her mesmerise the wealthy, powerful men involved in her games. They’ll do anything to play in her games, even attempt to leave a Monet painting as collateral. She gives a brilliant performance. She was fierce, and she commanded every scene she was in with such composure. She truly shines.

Elba gave a marvellous performance as well and his chemistry with Chastain was fantastic. There were also a lot of great supporting performances. Bill Camp was brilliant as Harlan Eustice, a knowledgeable poker expert whose refusal to quit lands him in hot water. Michael Cera delivers a solid performance as Player X, his harsh personality was shielded by his youthful arrogance. Jeremy Strong also gave a notable performance as the a-hole boss.

The camera work was very good. Sorkin managed to inject some electricity into an otherwise tedious sport to watch. The camera movement and editing are fluid and very stylish. Add in the sharp dialogue and you have some impressive scenes, especially the opening sequence which was thrilling to watch.

With a run-time of almost two and a half hours, you would worry that it could drag in parts. But due to the speedy screenplay and quality performances the time actually flew by for me.

However, there is an overuse of voice-overs and certain parts of the editing make it so you sometimes don’t know if things are happening in real time or in a flashback.

Overall, this was a very good movie with a screenplay that deserves an Oscar nomination. Great performances all round, good humour trickled in here and there and fine cinematography. I definitely recommend this one when it eventually comes out in January.