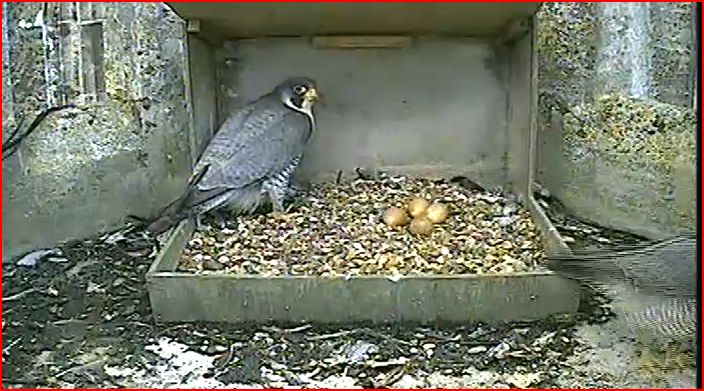 Keen birdwatchers can now monitor the lives of the peregrine falcons nesting on Chichester Cathedral, thanks to a live link to all the action emanating from the nest.

The peregrine falcons, which have been featured on television programmes such as BBC Springwatch and The One Show, have excited birdwatchers for a number of years at the city centre cathedral.

And today the video feed, which has been dubbed, “peregrine cam” has gone live. The footage gives viewers the chance to see the four peregrines eggs. It is said that they are soon to hatch.

The cathedral also has area set aside to view the birds, while the RSPB are said to have an operative –  in the Royal Chantry Garden – on hand to help visitors understand what’s happening in the nest, and who will help with general bird queries, too.

The peregrine is a large falcon and it is verbally accepted that it is the fastest flying bird in the world. It is known for its spectacular aerial dives in pursuit of prey. Dives have been known to reach up to 112 mile an hour.

The Cathedral website reports: “The peregrines do not hunt around the immediate cathedral precincts, however, as there are too many other buildings and not enough space. In Britain, most peregrines nest on cliffs, including the Sussex coast between Brighton and Eastbourne, but cathedral turrets will do!”

See the birds at www.chichesterperegrines.co.uk