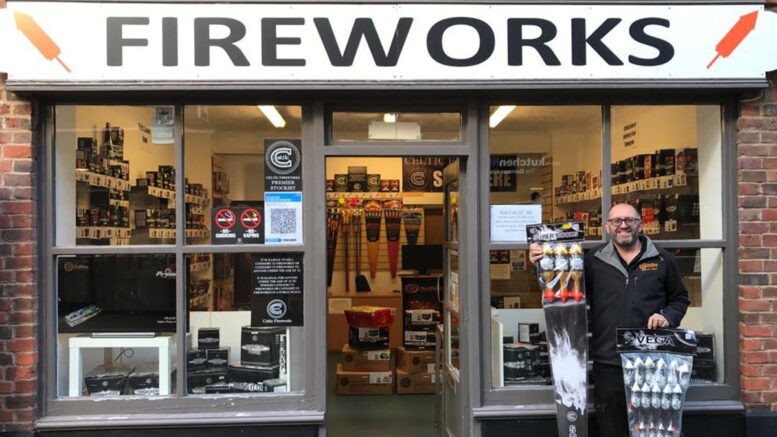 He has pretty much seen it all when it comes to fabulous fireworks displays. And over three decades in the industry, this pyrotechnics expert has heard more “ooohs” and “aaahs” from excited onlookers than most.

Stephen Harriott has worked on dazzling displays for stand-out projects such as the opening of the London Eye on Millennium Eve, the Queen’s Golden Jubilee at Buckingham Palace — and even created a stunning show for supermodel Jodie Kidd’s wedding.

Now he and his team have hit the high street, while maintaining an online shop. Stephen’s latest venture is to open a retail outlet in Chichester which has the largest stock of fireworks on the south coast.

And with Guy Fawkes night inching ever nearer, the idea of opening up his vast stock – including favourites such as rockets, fountains, Catherine wheels and sparklers – to the public seemed like a logical solution.

With large public gatherings put on hold because of the pandemic, Stephen knew he had a challenge in front of him to maintain his business, Selstar Fireworks Ltd. Displays have been discouraged which is a huge shame given that so many people have enjoyed the kaleidoscopes of colour with wondrous shows in the past.

“We have had to reshape our business model and bringing superb fireworks along with expert knowledge to the retail market makes perfect sense. Now we’re very much open for business in Crane Street, off North Street, in Chichester, and already we are busy which is so heartening!

“Come in and chat with our friendly experts for advice on your home display. We have a huge variety of fireworks, including a good range of a low noise fireworks. At first we’re going to be open until November 10 to see how things go.”

With displays on hold, Stephen only has to look back to read words of encouragement hoping that, in the future, he will be able to once more do what he loves most.

The Chichester Centre Partnership (which in the past has arranged the city’s Christmas lights switch-on) provided a glowing testimonial:

“It was spectacular! I think the fireworks were probably the best we have ever had, they looked amazing from the streets the silhouettes of the cathedral and market cross were amazing!”

And the RNLI Selsey were equally impressed with the extraordinary extravaganza for a fundraising effort during Selsey Lifeboat Week:

“Thanks for a fantastic display during lifeboat week. It just gets better every year! The feedback we have received from regular attendees has been the ‘best display ever’!”

And Stephen, who was crowned British Firework Champion in 2007, 2017 and champion of champions in 2019, is more than happy to give something back to all the amazing emergency services and armed forces who have helped the nation pull through during these testing times. He explains:

“We are offering 10 per cent off all in-store purchases to Blue Light Card holders!”

What a sparkling gesture!