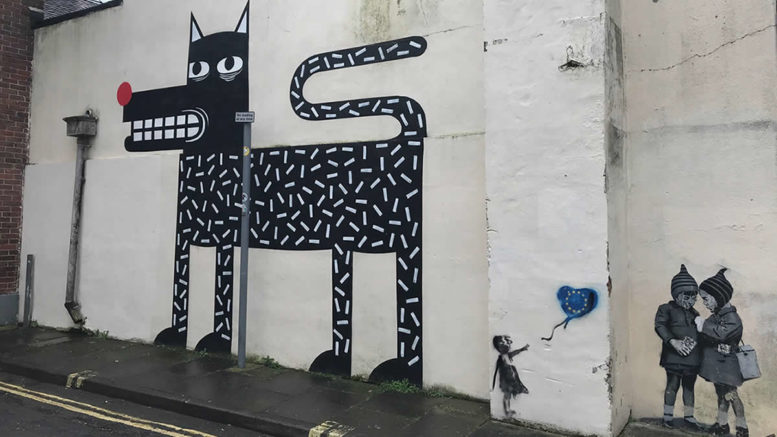 Chichester needs more street art to brighten up the city once a sense of normality has returned after the coronavirus crisis.

That’s according to the good folk of the city we spoke to following the emergence in North Pallant of new artwork that imitates the stencil-work of Banksy and his creation entitled “Girl with Balloon”.

The new depiction, which appears alongside a piece known as “Watchdog”, is said to have been painted to mark Britain’s exit from the European Union back in January. Instead of the red balloon in Banksy’s original piece, this balloon is blue and has in it the colours of the EU flag.

Like many other cities throughout the land, Chichester is in a virtual lockdown situation following government guidance to try to stop the spread of the Covid-19 virus. The pandemic has swept the globe and the measures in place will hopefully help cope in the aftermath of a spike in the number of people who contract the potentially lethal virus.

With so much uncertainty about the future, many people are turning to culture to lift their spirits and the residents of Chichester are no different. When quizzed on whether or not more street art would enliven the mood of the city’s dwellers, the majority of those asked said that they thought it to be a great idea.

Ian North-Faddows, a retired electrician, said that he was convinced art was the way forward to bring an air of buoyancy to the city’s “rather stuffy” image. He added:

“There is a general perception, right or wrong, that Chichester and those who live here can be, at times, rather stuffy, but I honestly have never felt that. But that doesn’t mean to say we couldn’t brighten things up and art is a great way to do this. The street art we have at present is tastefully done and I wouldn’t want to see rubbish street art appear, it would have to be done with some class.”

Annie Cullen, a former teacher who is now an e-commerce entrepreneur, said new art would help signify the end of the crisis. She said:

“We’re not sure when this will be over but when that time comes what better than something thought-provoking to help us remember what we would have come through?”

Nigel Morrow, a civil engineer, thinks that Chichester District Council should commission the art to give it an official seal. He added:

“This way we could give the recognition to the artists involved. The majority of street art seems to be anonymous but a lot is so good that it deserves praise and as the creator you deserve that praise. I’m all for it.”