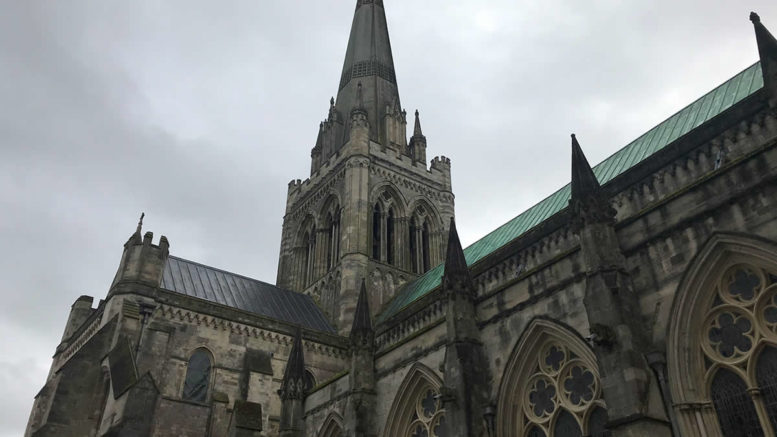 Chichester Cathedral has long provided a familiar landmark as part of the cityscape and continues to do so — but these days there is a two-tone aspect to the colouring of the iconic building’s roof.

For those city-goers, onlookers and interested parties who care to glance skywards when wandering past the cathedral will see that part of the roof is slate grey, while another section is mint green. This is because some of the work (which started in 2018) on the roof has been completed (the slate grey is the refurbished look) while more toil to complete the huge project to replace the copper roofing that remains.

The second phase of the five-year job was completed at the end of 2019 and saw the scaffolding surrounding the cathedral taken away to reveal the new lead roof, providing a striking visual contrast with the remaining green copper covering the nave.

The new-look cathedral has been met with high praise from an assortment of residents and visitors alike. Eric Snaresbrook, 57, a retired train driver, said he was glad that the efforts of those who have worked on the cathedral are now on show.

“It looks like a first-rate job and it is ever so heartening to see that such super progress is being made. I actually enjoy gazing at the roof and enjoying the contrast of the grey and green. But, of course, this will all change when the work is finished and the rest of the roof will be grey too.”

Visitors to the city are also pleased at what they see. American tourist Nina Goldstein, 32, who is touring the UK from her home in Wisconsin, said she was transfixed by the cathedral and the city’s abundance of interesting historical assets.

“It’s such a fantastically interesting city with so much to cherish. The cathedral is in many ways the pinnacle of the attractions and I can’t stop looking round it, or indeed at it; the roof, that is. I’ll be keeping track of the work via the internet and can’t wait to see the finished look when the work is completed.”

This summer work will start on the third phase of the project and this has been done to help protect the cathedral’s famous peregrine falcons — they appear in the spring to breed on the spire. Work on the nave roof will get underway once the chicks have flown the nest.

Meanwhile, the Chichester Cathedral Trust is still raising funds to try to reach the target of another £1.7million required to complete the work, with the entire project estimated at costing around £6million once compete.

Commenting on the project, Stephen Waine, who is the Dean of Chichester, said the cathedral has been a sacred place of Christian worship for more than 900 years and that:

“The project is vital in protecting the cathedral’s future for all.”