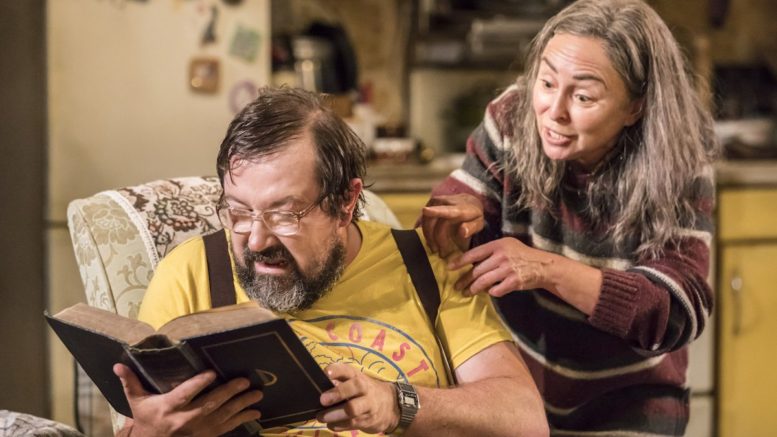 Samantha Spiro summed it up perfectly. Speaking of why people should see the enthralling The House They Grew Up In, currently at Chichester Festival Theatre, she said: “It’s gritty, and edgy, full of heart and warmth…and humour.”

What she didn’t mention, of course, is quite how wonderfully she portrays her chaotic character Peppy, sister of equally eccentric Daniel (Daniel Ryan, making his Chichester debut), in Deborah Bruce’s play, directed by Jeremy Herrin.

Spiro’s visceral and intelligent depiction of ever-anxious Peppy is one with an abundance of incredible intensity. Ryan, meanwhile, manages to deliver a touching performance of skilful restraint (apart from one episode in which he is allowed to blow his top following yet more conflict with his sister).

The setting is a residential street in London where the reclusive, hoarding siblings can barely move in a house packed with discarded detritus gathered from a lifetime in the same abode.

They would probably have never come to our attention (or that of police, social workers and nosey neighbours) but for the visits of Ben (Rudi Millard), an inquisitive, lonely eight-year-old boy from next door. One of his night-time sojourns over the garden fence leads to the unwelcome attention of the modern world.

Bruce’s apposite writing allows us to explore the full gamut of bitter-sweet sentiment; passages of piteous poignancy seamlessly metamorphose into matters of mirth (Peppy surmising that her cat had probably been stabbed in New Gross Gate was, for me at least, horribly funny).

Go take a seat in The House They Grew Up In and be prepared to embrace your emotional intelligence. Yours and Samantha Spiro’s, especially.