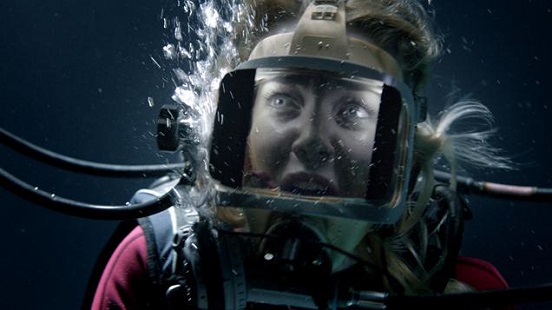 In 47 Meters Down (15)  two sisters they try their hand at shark diving, but due to the sceptical condition of the boat and its winch, it snaps and they plummet 47m down into the dark abyss. Surrounded by sharks and running low on oxygen, the sisters will have to venture out from the safety of their cage in order to have any chance of survival.

It’s an interesting premise, but a poor execution. I’ll start with what I liked about the movie, and there’s not much so this will be short. Some of the imagery we get with this film is quite terrifying, having Mandy Moore’s character swim to the edge of a cliff, only to see nothing but darkness below was a scary thought, you can’t see anything but the sharks can see you.

There were some good scares and some tense moments with sharks popping out left, right and centre, one particular scene with one of the sisters lighting a flare only to find out they are completely surrounded by razor sharp teeth was a pretty good shot.

The characters themselves were pretty weak, we begin the film with a stereotypical set up to try and get us to care about these characters, Moore’s character has just been dumped so her sister comes up with a brilliant idea to make her boyfriend jealous, post photos online of them shark diving, it is as ridiculous as it sounds.

They then discover the fine vessel they will board for their activity, a shady looking fishing boating with a rusty cage dangling off the end, red flag if you ask me. Minus the odd few scares we get, the rest of the film is very boring, with the characters not really doing a lot other than check their oxygen levels and breathe hysterically.

Now I want to talk about the ending so I will issue a spoiler warning now, do not read on if you don’t want to know how the film ends, you’ve been warned…

Whilst one of the sisters is out of the cage, the guy on the boat explains that when changing oxygen tanks you could experience hallucinations if not done properly, moving on, the sister gets a big open mouth kiss from the shark in front of Moore, fast forward, the sister is still alive, Moore escapes the cage and they both get rescued, hooray!

Nope, it was all a hallucination and Moore is still stuck in the cage, then the ill equipped coastguard show up and rescue Moore for real.

I saw this so called twist coming from a mile away, the whole point of a good twist is to give us false hope, but Moore still gets rescued anyway, not a great ending if you ask me.

Overall, this movie is very forgettable, minus a couple of good shots and some average looking sharks, it was rather boring. If you’re looking for a half decent shark movie, skip this and just watch The Shallows again.