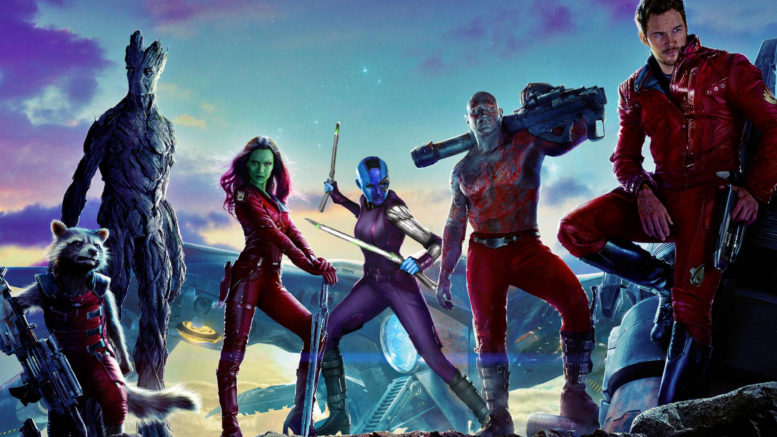 With the release of Guardians of the Galaxy Vol 2 just around the corner, I thought I’d do a countdown of my top 5 favourite movies in the Marvel Cinematic Universe. Therefore I will be excluding films from the X-men universe, as those are saved for another countdown.

Remember, this my own opinion, some people may love the ones I leave out of the list!

GUARDIANS OF THE GALAXY

When this film was announced I thought wow, they must be scraping the bottom of the barrel for heroes. But it turned out to be one of the best films of 2014, excellent performances from the guardians, especially Dave Bautista’s Drax, who is absolutely hilarious, and some brilliant action set pieces made for thoroughly enjoyable installment in the MCU.

Although this was another ensemble movie, the directors did a great job establishing this was still a Captain America movie. Cap and Bucky’s relationship was still a big part of this film, and seeing how their relationship affected everyone around them was really interesting to watch. The feud between Cap and Iron Man was really well done, and going into Infinity War next year it will be interesting to see how their new relationship changes the dynamic of the Avengers. The action is insane, don’t even get me started on how awesome that airport scene is, one of the best scenes in any Marvel movie.

Coming in at number 3 is…

The big one, all our favourite heroes in one movie, what could be better! It was back in the post-credits scene of Iron Man where we first caught wind of the Avengers, and when we finally got their big screen introduction it did not disappoint. Incredible action, great comedic moments, very likeable characters and a fun story made for a very entertaining movie experience. This film also set the bar quite high for Marvel villains, Loki was a charismatic, smart, ruthless foe for our heroes and there hasn’t been a villain, in my opinion, in any Marvel movie since that has come close to Tom Hiddleston’s portrayal.

Narrowly missing out on the number 1 spot is…

The film that kicked off the MCU back in 2008. Robert Downey Jr was the perfect casting choice for Tony Stark expertly showing off the characters obnoxious lifestyle, all of the humour is well written and delivered in a very sarcastic, funny way by RDJ. The action is very realistic, with great CGI throughout, and some great scenes, especially the cave escape scene, up there with the best action scenes in a Marvel movie. DC, this is how your start a shared movie universe.

And coming in at my number 1 spot…

What makes this movie so good is how it can stand on its own, if you take out the references to other films or characters, this is a well-constructed action-thriller. While the action in the Avengers is fun to watch, the action in The Winter Solider is probably the best we’ve seen in the MCU so far, it’s very gritty and realistic, with excellent choreography. The story is gripping, with great performances from Cap and Scarlett Johansson’s Black Widow. I think this movie changed a lot of people’s opinions of Cap, his first movie outing wasn’t the best and he wasn’t everyone’s favourite avenger but this film definitely fired him up the leader board in terms of the best Marvel hero. This is not only one of the best Marvel sequels, but one of the best movie sequels ever made.