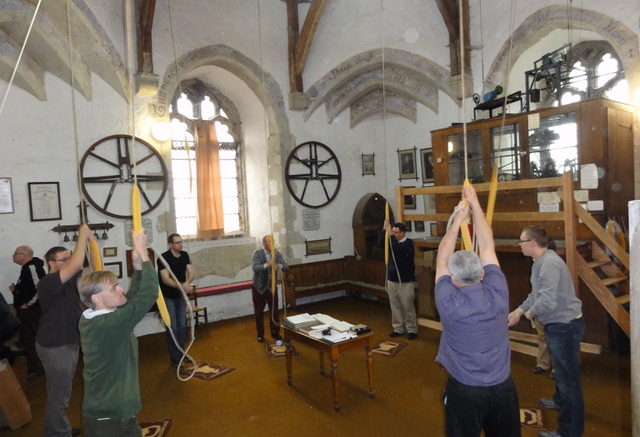 There’s a right old ding-dong going on at Chichester Cathedral tomorrow (Saturday). But don’t panic, there has been since the bells first started being rung there in the year 1232.

The “ding dong” in question is a keenly anticipated open day at the Bell Tower, where visitors have the rare opportunity to take a tour of the medieval structure, which is ordinary closed to the public.

Would-be campanologists are being urged to book in early at the Bell Tower for the chance to look around at the open day, which runs from 10.30am until 5pm.

“This special day offers a rare opportunity to see inside Chichester Cathedral’s medieval Bell Tower, normally closed to the public,” reads a promotional editorial for the open day. “Enjoy guided tours of the Ringing Room, demonstrations by our experienced ringers, see the bells ringing via CCTV and try the Bell Meadow Belfry Mini Ring.”

Chichester Cathedral is especially unusual among our cathedrals because the bells are not in a belfry above the church. Rather they are in a separate tower or campanile.

It is said that the present bell tower was built in the late 14th century or early 15th century. It is 107 feet high and 43 feet square at the base, and the walls are just over eight feet thick.

The Cathedral website explains: “Its upper levels include the Ringing Room, which also contains the clock mechanism. Here there is also an impressive collection of framed engravings of cathedrals, churches and clergy, and records of peals of 5,040 or more changes rung at various times from this belfry.

“None of the original bells have survived, however, the oldest was cast in 1583 and the treble and second were cast in 1729. The upper levels are accessed via a narrow steep spiral staircase at least twice a week when the bells are rung.”

Health and safety regulations mean visits to the ringing room are restricted to people aged between 10 and 79. Children under the age of 16 must be accompanied by an adult. Visitors must be fit and healthy and wear suitable clothing/footwear.

For safety reasons, Chichester Cathedral reserves the right to refuse entry. Places are limited, to avoid disappointment visitors are advised to head straight to the Bell Tower on arrival to book a slot.