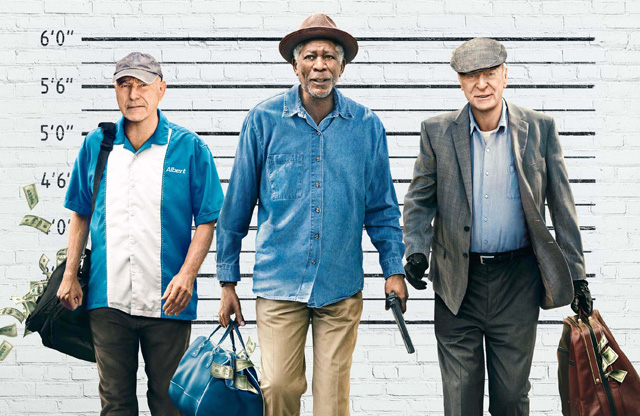 You’re never too old to get even…

Going in Style tells the story of three lifelong friends who are struggling to pay their bills and provide for their families, after their pensions are frozen, they decide to rob the very bank that is stealing their hard-earned cash.

First things first, seeing these three acting legends on screen performing together was the best part about this movie. Their chemistry is undeniable, and they are very funny, Alan Arkin in particular. His character Albert, steals the show in every scene with his dry humour and wit. Freeman and Caine’s characters are also great showing they both have a great sense for comedy, leaving me with a big grin on my face throughout the majority of the movie.

The heist itself is very cleverly done, with a crafty alibi scene. However, the level of realism in the heist lost me slightly. Can a group of 80 year olds seriously rob a bank that easily? After the heist scene, the movie slows down in terms of pacing, and the laughs became spread, meaning there was a good 15/20 minutes where I didn’t laugh at all.

Overall, this was a very light-hearted, enjoyable movie, with three great leads and an intriguing social commentary on growing old in America and the lengths you will go to depending on the circumstances. Also, I like the fact that this movie did away with the generic old man jokes, like Morgan Freeman’s character is able to use Skype without saying things like “where’s the mouse, what’s this button do”.

REVIEW: Brad’s Status is thought-provoking and relatable in its depiction of mid-life inadequacies