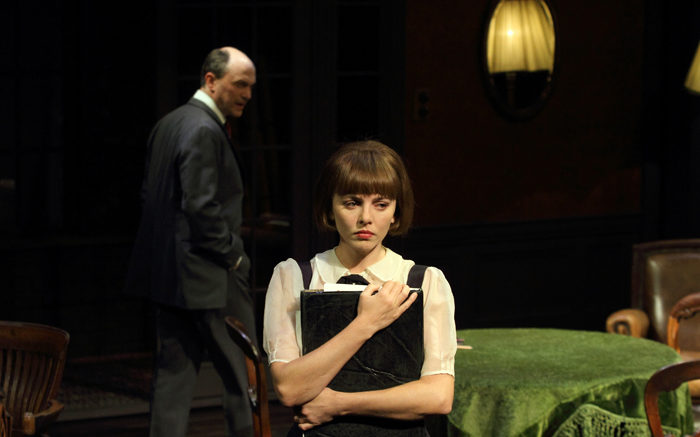 Ophelia Lovibond’s powerful portrayal of Lois Relph would have surely met with the approval of Githa Sowerby, who wrote The Stepmother, showing at the Chichester Festival Theatre until September 9.

Lovibond’s exquisite performance exudes the requisite strength to tackle head-on challenges facing women from a century ago, such as equal pay; yet, sadly, they remain pertinent today.

Opposite her, Will Keen, as her bit-of-a-scoundrel husband, was brilliantly animated and this enraged flamboyance, along with some superbly delivered lines, was a highlight.

Sowerby’s work has up until recently been consigned to history and those who sat before Richard Eyre’s production at the Minerva must be puzzled as to why this has been the case.

Her best-known play, Rutherford and Son, is acknowledged as one of the 100 most influential plays of the 20th century. Here, in her lesser known yet not unworthy work, we are taken to 1924 and a comfortable abode in Surrey.

Orphaned Lois weds the older Eustace Gaydon (Keen) in the mistaken belief that he has her concerns at heart. Of course, he doesn’t. Far from it, in fact. He wants her money; an inheritance from his sister who had clearly seen through his devious ways.

But he gets his hands on the loot ably assisted by the convenience of marriage and a younger, naive bride — before his wife goes on to build up a thriving dress designing business.

The money is forgotten about as far as the now independent Lois is concerned until one of her devoted step-daughters needs some financial assistance and she seeks a slice of the fortune; and it is here where the true motives of the manipulative and conniving Eustace come to light.

The lure of King Lear! McKellen and Co. switch to West End after success at Chichester Festival Theatre