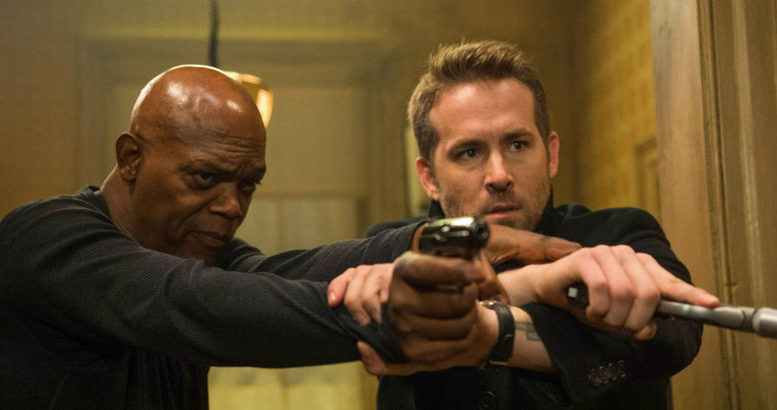 Vladislav Dukhovich (Gary Oldman) is a ruthless dictator on trial for the crimes he has supposedly committed in The Hitman’s Bodyguard (15), and he will walk free unless someone coughs up some legitimate evidence of his heinous acts.

Step forward Darius Kincaid (Samuel L. Jackson), a hitman who has dealt with Dukhovich in the past, and now must be escorted to the hearing by bodyguard Michael Bryce (Ryan Reynolds) in order to testify against Dukhovich to get him put away for good, and thus chaos ensues.

Let’s start with the performances. Ryan Reynolds is great as usual, very witty and sarcastic, so nothing new there, I find that Reynolds plays the same sort of character in every movie he’s in lately, that’s not necessarily a bad thing because it works for him, and his type of humour worked for this movie. Sam Jackson plays a typical Sam Jackson type, he’s very cool and efficient, and likes a particular word, those who like Sam Jackson will know what word I’m talking about, every other line he uses it.

It was interesting to see this relationship grow over the course of the movie, and I thought they worked well together, I genuinely felt like they annoyed each other, now that may be down to good acting or the fact that they actually didn’t get on, who knows.

The action was very entertaining, some good fist fights and some excellent car chases, very thrilling stuff. The jokes landed most of the time, but at other times they fell flat, nothing made me laugh out loud but there were a few moments that made me chuckle. Also, the plot felt a bit convoluted which was unnecessary, convoluted doesn’t always mean clever, and due to the long run time it dragged on a bit in parts, I don’t think it needed to be two hours long.

One final bit, Oldman felt like a wasted opportunity, the fact that he was playing the bad guy didn’t matter whatsoever, he had so little to do that they could have easily got any random Russian guy to play the big bad and it wouldn’t have made a difference.

Overall, The Hitman’s Bodyguard was a very entertaining popcorn flick, and when I say popcorn flick I mean just sit back, relax and enjoy the film for what it is and don’t try to think about it too much, just have fun with it.

REVIEW: Avoid all trailers for Daddy’s Home 2 unless you enjoy not laughing for 90-plus minutes