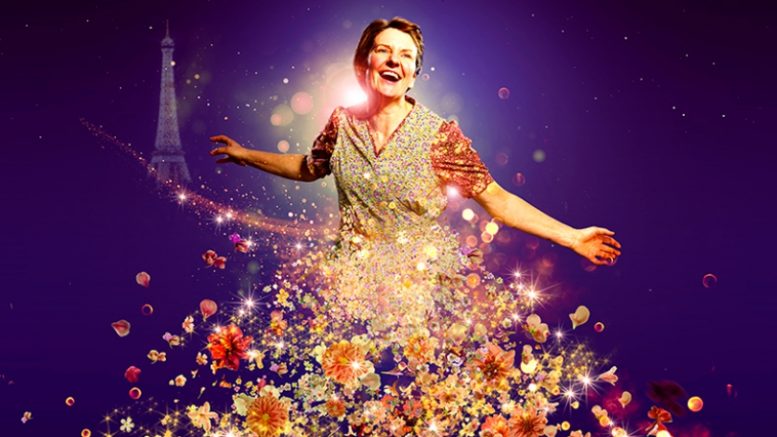 Bouquets all round for the wonderful Flowers for Mrs Harris, a newish British musical that is blossoming fully at Chichester Festival Theatre, and is a bloomin’ triumph by any measure.

Artistic director Daniel Evans has reintroduced the musical, from the story by novelist Paul Gallico, to Chichester after he originally staged it in Sheffield and we must be thankful that he has done so!

In complete contrast to Me and My Girl, the previous musical of Festival 2018, Flowers for Mrs Harris is a far subtler offering but please don’t think that because of its gentleness it is not powerful. It is full of flower power, especially at the production’s colourful conclusion.

Flowers for Mrs Harris Is a touching tale, told through compelling, well-crafted songs, illustrating the importance of kindness not just for the recipient of goodwill but also the provider. In this instance the acts of tenderness come from Battersea’s very own Aida Harris (Clare Burt delivers a faultless, uplifting performance), a seemingly ordinary Mrs Mop who lives a meagre life through various cleaning jobs for a list of clients.

In reality, all of the clients are in need of much, much more than Mrs Harris’ dusting and polishing. One such recipient of Mrs Harris’ spick ‘n span services is the ageing Major, a frustrated war hero delightfully played by Gary Wilmott, stiff upper lip and all, in his first role at the venue.

Aida’s husband (the excellent Mark Meadows) perished in WW1 but his spirit is on hand to help her through testing times when, missing companionship – other than that given my needy neighbour Violet Butterfield (so convincingly played by Claire Machin) – she develops an unlikely obsession to purchase a mesmerising, and expensive creation by French fashion designer Christian Dior. This leads her to travel to Paris and somehow gain entrance to a private showing of the latest creations from the legendary couturier.

The dazzling show is stunningly depicted by catwalk models descending a sweeping stair case dressed in glorious garments, each more magnificent until the crowning glory emerges as a resplendent rose red creation that overwhelms Mrs Harris. Owning the dress for which she has scrimped and saved may lead to the salvation of which Mrs Harris is so deserving  But if it is to do so, a journey through emotionally charged twists and turns has to be undertaken with an unexpected finale that positively blooms, just like this captivating musical.