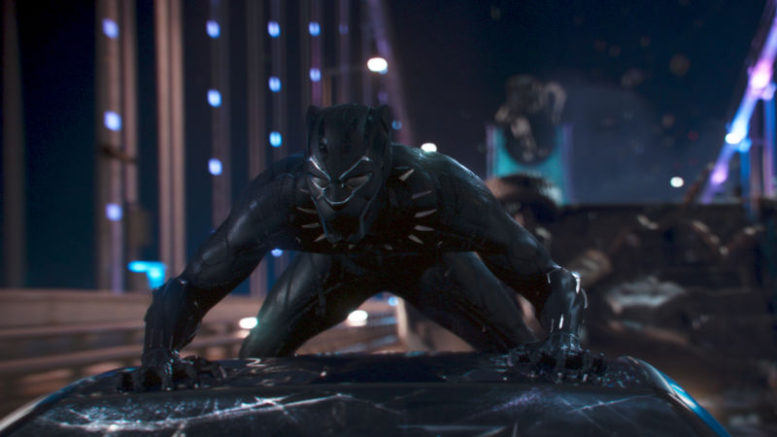 Black Panther (12A) is the last standalone Marvel movie before Avengers: Infinity War and it picks up immediately after Captain America: Civil War. The new King of Wakanda, T’Challa (Chadwick Boseman) must return to his technologically advanced home in order to succeed the throne after his father’s death.

However, when Erik Killmonger (Michael B. Jordan) and Ulysses Klaue (Andy Serkis) conspire to destroy Wakanda, it’s up to the Black Panther to stop them.

From the beginning, I was immediately invested in Wakandan culture and was fascinated throughout. The look and feel of the world was very impressive, with some truly stunning visuals. This was probably the most unique Marvel movie since 2014’s Guardians of the Galaxy.

The action was excitingly choreographed with director Ryan Coogler taking inspiration from the Kingsman films as well as his previous film Creed for his fight scenes. One scene in Korea was particularly thrilling, starting with some hand-to-hand combat in a casino, culminating in an exhilarating car chase.

The acting was very good all round. Boseman was good as the lead but my favourite performances came from Danai Gurira (Okoye), Serkis (Ulysses Klaue) and Letita Wright (Shuri). They provided most of the films comedy, which was nice to see as Gurira’s character in Walking Dead (Michonne) is usually quite miserable.

But, my favourite part of this movie was the soundtrack. Produced by Kendrick Lamar, the music in this instalment was brilliant. It gave the movie a distinct identity that sets it apart from other Marvel flicks, similar to Guardians of the Galaxy.

Although the film was very unique in its aesthetic, it felt very similar to other Marvel films in terms of storytelling, this meant that at times, the thing I thought would happen, happened, which made it quite predictable.

Jordan’s villain was nothing to get excited about either. They say a Marvel film is only as good as its villain and I thought, while I understood his motivation to be evil, he was just an angry child the whole time. He wasn’t as bad as Malekith (Thor: The Dark World) or Ronan the Accuser (Guardians of the Galaxy) but he was nowhere near the standard set by great Marvel villains such as Loki (Avengers), Hela (Thor: Ragnarok) or Vulture (Spiderman: Homecoming).

The pacing was a bit off as well resulting in a bit of a drag in the third act. Also, after the epic Korea action scene we had to wait for so long until something else exciting happened.

And one thing that has been annoying me with Marvel films lately is the need to undercut serious moments with a joke. They did it a lot in this movie and it was just unnecessary. It is ok to be serious once in a while Marvel!

Black Panther was a very cool movie. It wasn’t as good as I hoped as good performances, thrilling action and fantastic soundtrack were brought down by a lacklustre villain, pacing issues and an overreliance on comedy.

Dunkirk review: Our movie critic Josh Burford is won over by latest blockbuster…