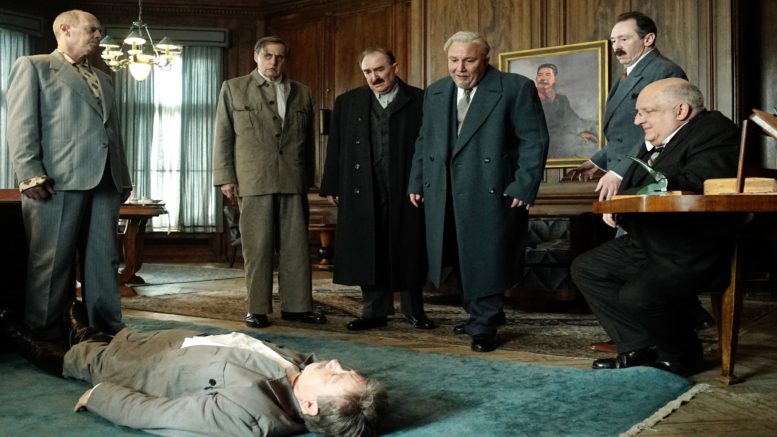 The Death of Stalin (15) tells the story of Stalin’s closest minsters as they scramble to figure out who will take the ruthless dictator’s place following his death. When Stalin suffers a stroke, his guards are so terrified of entering his room that he is left on the floor in a puddle of his own urine for hours. Not only are his inner circle fighting to replace their fallen leader, they’re also trying not to end up dead themselves.

The casting was perfect. Director Armando Iannucci has recruited a slew of fantastic actors for this film. Jeffrey Tambor’s Malenkov is brilliant as Stalin’s replacement who is an image-obsessed buffoon. Steve Buscemi’s Khrushchev is a determined, talkative weasel who was so scared of his leader that he writes down jokes that worked and ones that didn’t; “I made a joke about the navy, he didn’t laugh”, “No more navy jokes then”.

Michael Palin is great, bringing a Monty Phython-esque humour to his comedy, with his stand-out moment being his enormously funny committee meeting speech. Jason Isaacs was hilarious as the macho war officer Zhukov. But it was Simon Russell Beale’s Beria who was the best of the bunch for me, he played a horrible monster who’s raped and murdered countless Russians, carrying out Stalin’s kill list with cruel attention to detail; “Shoot her before him but make sure he sees it”. I thought his performance was fantastic.

It was great seeing this ensemble cast interact with each other. This might be one of the funniest movies I’ve seen so far, this year. All the actors had great comedic timing and delivered some excellent jokes, none of them really fell flat which is rare. The reason I found it so funny was probably because all the actors were American or British using their respective accents. I don’t think I would have found it as funny if they were all putting on Russian accents.

Ianucci has managed to tackle an important piece of Russian history, with a brutal dictator whose government were responsible for starvation, labour camps and mass executions, and deliver extremely hilarious results. He has shown he is more than capable of getting laughs from the most serious topics imaginable.

Overall, I loved The Death of Stalin. Not only is it a chaotic laugh riot but it also shines when it drops the comedy and hits you with some serious stuff. A few scenes hauntingly depict the lengths to which some will stoop in order to get their way. Iannucci has delivered an excellent piece of political satire.