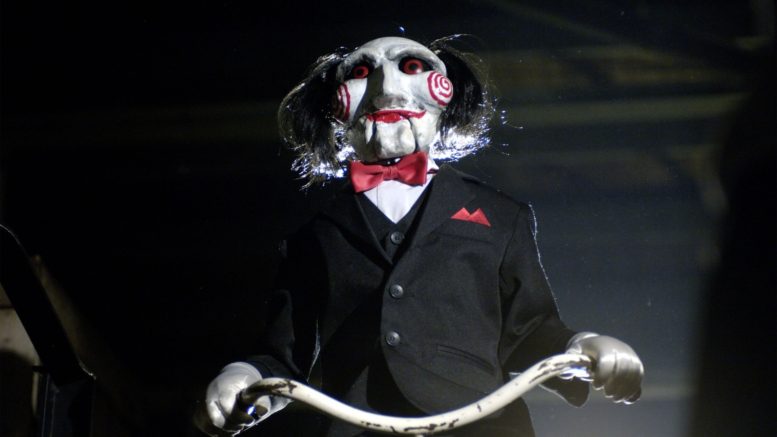 Back in 2010 we were given, what we thought was, the final Saw movie in Saw 3D: The Final Chapter. How naive we were, did we really think they were done with this franchise? The news of another entry in this blood-soaked franchise releasing this October will either delight or annoy fans.

That being said, in honour of the release of Jigsaw this week, I have been binge-watching the torture-porn series and will be ranking them from worst to best, obviously not including the new one.

What started as a tense, disturbing, crime-thriller similar to the likes of Seven, quickly sparked a new sub-genre complete with disgusting, grotesque body horror. Let’s take a look at where each Saw fits into my list.

If you hadn’t already guessed, there will be spoilers in this list. Let the games begin… 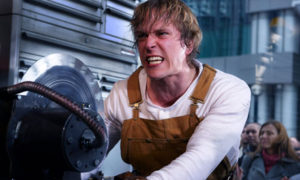 The last in the series is the worst by far. For the final piece of the puzzle I was expecting something more intelligent with a shocking twist ending, instead what we got was a rushed attempt to close all loopholes from the previous chapters.

This was just a stupid movie; the opening trap was downright ridiculous, I know that cheating is wrong but did the girl deserved to get sawed in half by her lovers? Probably not. Also, only one tiny woman tries to break the glass, when that fails the public just sit back and watch the gore unfold! Another stupid thing; Bobby was a supposed Jigsaw “survivor” but there would have been an extensive police report detailing his ordeal so how has he got away with this lie?!

I could go on listing the absurd things in this movie, but I won’t. The acting is the worst in the series by far (Jill runs around like a cliché horror movie chick), the characters were pointless and added nothing to the story, and the “twist” ending was so predictable that fans had already spent six years predicting it on the Saw message boards. Let me get this straight; Dr Gordon was screwed over, had to saw his own foot off and lost his family all in one night, and we’re supposed to believe that he forgives Jigsaw and wants to help him kill people, it makes no sense!

There is no outcome of Bobby’s game, we never cared about his character and I almost wanted him to fail. When he did, he didn’t learn anything from his game and we never see what happens to him. This movie just ran out of ideas, it was poorly edited, had a messy story and unrealistic, over-the-top traps complete with laughable blood effects. This franchise went downhill after the third one but Saw 3D completely ruined James Wan’s brilliant first instalment. 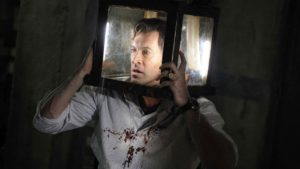 So many problems with this instalment. Let’s kick things off with the lack of a physical Jigsaw, he’s just not in it enough, reduced to mainly voice work. I will say, when he is present, Bell’s performance was solid as usual and very compelling. It’s a well-paced film that delivers some thrills, but it relies heavily on flashbacks and reused footage which was tedious to watch.

The acting was pretty terrible, spouting out cheesy lines that were made for a trailer (“It’s our next nightmare”). The characters were just boring and stupid, they would go from being crazy and trying to kill each other to let’s work together guys, it just wasn’t believable. Also, what is with the police in these movies?! If I saw a person-sized box filled with glass and a tape recorder in a room, I’d be straight out the door calling for backup!

The traps were probably the tamest and most boring of the series. Maybe there’s something wrong with me if I think decapitation, getting stabbed in the neck or explosions make me yawn. With the exception of the swinging blade trap at the beginning or the crushing trap at the end, everything else just wasn’t very original or creative.

The “twist”, if you could even call this one that, was predictable and quite underwhelming. It was just another attempt to milk this franchise, could have easily merged IV and V instead of splitting, but money rules all I guess. 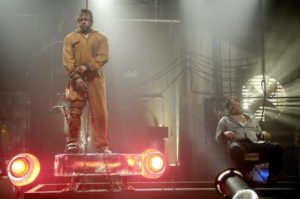 It’s clear they were running out of steam when the made this one. Despite the death of his character in the third one, Tobin Bell is still a big part of the film in tapes and flashbacks, one of which showcasing his first trap which was a great scene. I just felt like I wanted more of him on screen as opposed to tape recordings.

It just didn’t bring anything new to the franchise. The twist was better than the third one but nowhere near as good as the first two films. The ending was quite confusing as they were trying to intertwine everything, and it just didn’t work, leaving me with lots of questions as the credits rolled. It uses the same nausea-inducing editing the series is known for and the police and agents seem to lack intelligence, all they have to do is listen to the rules!

Same as the third one the victims have to rely on others to save them, with some of them potentially being innocent. The guy with his eyes sewn shut at the beginning for example; why was he there? The trap was very one-sided so how was he supposed to get out? The creative team have clearly forgotten the meaning of these movies and decided to focus more on the gore. 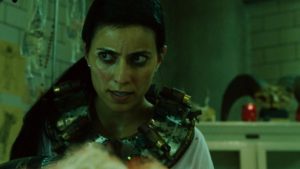 This one really upped the ante in terms of gore! The traps are even more brutal and disturbing this time round. Rotting pig carcass swimming pool was a clear winner for worst way to die. However, some of them were a little too far-fetched and couldn’t possibly be assembled by two people, considering one of them is terminally ill! (flashbacks in later films did clear this up, but at the time it was quite unbelievable)

The acting was a lot better this time round, Tobin Bell was once again brilliant establishing himself as one of the most deranged and original horror movie villains. It does manage to explain some of the events in the first two and ties them together nicely, but I found myself bored at times and the constant flashbacks to memories became a bit tedious. 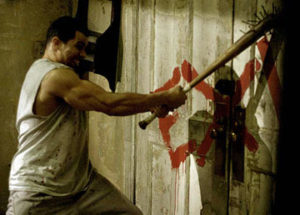 Released a year after the original, Saw II did everything a horror sequel should. Increase the body count, the kills are more unique and violent and expand the story. The director has made a film about how people’s lives are dictated by their unavoidable flaws and how panic destroys people.

Jigsaw takes a more prominent role this time around, played terrifically again by Tobin Bell. He made me appreciate life as I don’t want to be drugged by a pig mask-wearing psycho and placed in a deadly game of survival.

The set design and atmospheric lighting was on point, creating a very creepy environment for our characters to explore. The traps got a significant upgrade, leading to some very creative kills and if I wasn’t already on the edge of my seat, the shocking twist definitely pushed me off it. 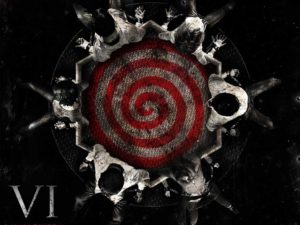 I loved this one, they definitely got things back on track after the dismal fourth and fifth gore-soaked outings. The story is a lot more interesting this time around and we spent more time with the characters, allowing time for them to develop, making the film more engaging.

The pacing was well-done, cutting back and forth between the main story points whilst also throwing in the classic Saw flashbacks, so we can still get our fix of the brilliant Tobin Bell. I was never bored, and the twists and turns were very intriguing and surprising.

The traps are back to being amazingly sadistic and brutal. Much more inventive than IV and V, with too many stand-outs to choose from, including; the shotgun carousel, steam maze and the pound of flesh trap.

The story is full of revelations and the writers did a great job of giving us new insight into situations we thought we already figured out. One problem I did have was that there wasn’t really any mentioning of the previous films events. What was the point of the people in those traps? What happened to the two that survived?

For a later instalment, VI is brilliant but it narrowly missed out on the number one spot. 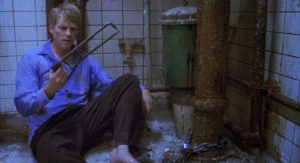 Was there ever any doubt? The original is hands down the best entry in the franchise. From its gritty, visceral visuals, fantastic script, and shocking twist, this movie had everything. Right from the start this very original story sucks you straight in and does not let you go until the credits roll.

Director James Wan has produced an absolute classic in terms of horror. His direction as well as the brilliantly written script from Leigh Whannell, who also plays Adam in the film, is amazing considering this was his first feature film.

What I liked about this one was that they cut away from the gore sometimes, it’s much more about what you don’t see as opposed to what you do. Example; when Gordon is sawing his foot off it only shows the gore once or twice and focuses more on the sounds and facial expressions/reactions of the actors. Later instalments just tried to gross the audience out, getting more and more gruesome instead of leaving it up to imagination.

The only problem I had was the reasons the victims were in the traps, they were a bit weak. This did paint Bell’s character as more of a psychopath as opposed to the methodical mastermind going after undeniably bad people in the sequels.

Wan has created a terrific horror icon in Jigsaw, who chooses those who are immoral and don’t value life to test in uniquely torturous ways. A clever, brutal horror-thriller, Saw, comes in at the number one spot.

There you have it; the Saw movies ranked from worst to best. We’ll just have to wait and see if the next sequel Jigsaw manages to breathe some life back into the series but until then…Game Over.

REVIEW: Avoid all trailers for Daddy’s Home 2 unless you enjoy not laughing for 90-plus minutes

REVIEW: Game, set and match! Battle of the Sexes is an uplifting and entertaining feel-good flick