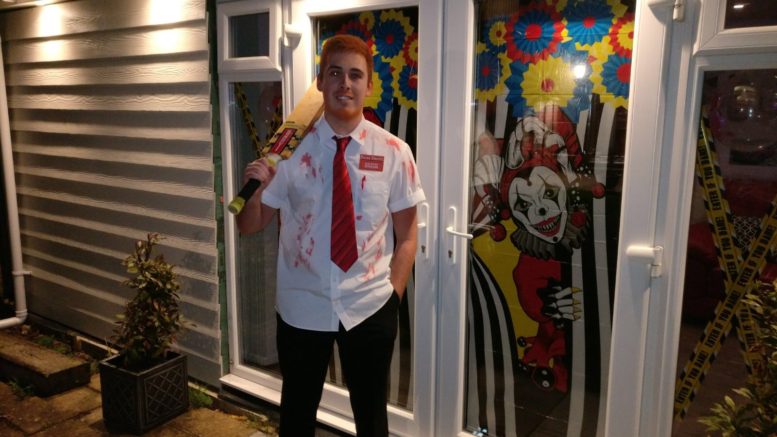 It’s that time of year again…trick or treaters, Halloween parties, getting all dressed up as your favourite movie characters, horror icons or just wearing something black with a tiny bit of makeup and calling yourself a cat.

I for one love Halloween, not for all the things mentioned above as we Brits don’t celebrate it like we should, but more for just chilling at home watching scary movies.

If parties and dressing up aren’t your thing then kick back with a group of friends, a big bowl of popcorn and check out one of my picks from my list of 9 scary, and 1 not-so-scary, movies to watch at Halloween.

If you didn’t see a film on this list that you thought should have been, be sure to check out my list of top 10 horror movies as it may be on there.

These are in no particular order…enjoy!

Michael Myers escapes from a mental hospital, 15 years after murdering his sister, to start another killing spree.

What better way to kickstart this list then with the ultimate horror masterpiece, Halloween. This was one that inspired the countless hack-and-slash flicks that followed but none of them have come close to Halloween.

Director John Carpenter created exceptional tension throughout, the excessive amount of blood and gore is avoided here as the violent actions carried out by the masked killer are mostly implied, as opposed to graphically shown; this only made the film that more terrifying. The score is chilling, the lighting and sound design are spot-on and it created the most iconic and, in my opinion, best horror movie villain of all time.

The body count is low for a slasher film and the kills are mostly bloodless but that doesn’t matter because the way he stalks and dispatches his victims are even more frightening. The film’s opening is a stand-out for me, the way it was filmed with one long shot with the audience seeing Michael’s first kill through his eyes was haunting.

After her mother is murdered, a teenage girl is stalked by a new killer that uses the horror genre to toy with their victims.

This movie redefined the slasher genre with its clever plot, engaging characters and iconic villain. Not only is it a good horror movie, it’s an impressive, tense thriller. The characters are great and all well developed, in particular Randy (Jamie Kennedy) who picks apart the horror genre in an entertaining way.

There is a lot of humour that’s relevant and it lands, there’s a lot of iconic movie moments that will keep you on the edge of your seat, and a great villain that joins Jason and Freddy Krueger as memorable horror icons. I must have re-watched this movie 50 times and it never bores me. If someone calls you and asks, “what’s your favourite scary movie?” hang up and lock your doors.

A girl is possessed by a demon and two priests are all that can save her.

This is the movie that all possession movies since have taken inspiration from. The movie caused walk-outs, vomiting, feinting upon its release 44 years ago, hence why it’s classed as the scariest movie of all time. Obviously with today’s technology people may not see the hype, but back then this was a terrifying experience for cinema goers with all the effects still holding up to this day.

It’s a smart, clever, expressive horror-drama with brilliant characters, fantastic effects and ground-breaking performance from Linda Blair, as Regan. Whether it’s the head-spinning, sludge-vomiting, murderous little girl, the quotable lines, clever story, there’s so much to love about this classic.

Two pensioners are freaking their grandchildren out with weird and disturbing behaviour while being visited by them.

I loved this film, didn’t catch it in the cinema but I wish I did. The premise is simple but executed very well with great acting from the grandparents who totally commit to the absurdity of some of their actions. The kid’s relationship is great, the brother is very funny and sarcastic, and the aspiring filmmaker sister is great as she attempts to document their visit.

The found footage approach was great because it allowed for some good jokes and self-aware nods to the unsuspecting audience. Director M. Night Shyamalan created a very creepy atmosphere with some good camera angles and sound design. Overall, this is a solid horror-comedy.

Three Salem witches are resurrected by a teenage boy, who with the help of his little sister and love interest, must try to stop them from stealing the souls of children.

Right were taking a quick break from the scary picks because I couldn’t have a Halloween list without this film. The casting of the witches was perfect; Bette Midler is hilarious and almost frightening at times, Sarah Jessica Parker is great as the dim-witted witch and Kathy Najimy is excellent as the funny, quirky one.

The story is engaging, the jokes are funny, and they keep you entertained throughout. Midler’s rendition of “I Put a Spell on You” was very memorable. The “fish out of water” moments are great, with the witches getting baffled and occasionally enchanted by asphalt, a bus, a TV remote and the idea of Halloween. Overall, great fun for the whole family, now back to a film that certainly isn’t for kids.

What starts as a fun cave exploration trip, soon turns into a fight for survival where a group of friends must fend off ravenous, cave-dwelling creatures.

This film had everything. The setting was brilliant, the cave system created a very claustrophobic and dangerous environment. Whenever a character has to squeeze through a ridiculously small gap it made my chest tighten, good job cave!

The scares are plentiful and they’re really well built up, causing me to jump out of my seat on occasions. The characters, although under-developed in some cases, all give fantastic performances.

The sound design is great with the audience hearing every noise echo throughout the desolate cave, as well as the bone-crunching violence which is brutal, bloody and terrifying. Overall, this is a relentless thrill-ride that is worth multiple watches.

AN AMERICAN WEREWOLF IN LONDON (1981)

Two American college students are doing a walking tour of Britain and get savagely attacked by a werewolf.

Probably the best werewolf movie out there with some of the most mind-blowing special effects in a horror film. Director John Landis expertly blends horror with comedy, the comedic moments were dispersed at the right times and the horrific moments came when you least expected it, making their appearance that more shocking.

The cast all turn in fantastic performances with David Naughton’s David carrying the film. Let’s get onto the most iconic scene…this film features the pinnacle in transformation scenes which has been replicated countless times but never surpassed. It’s so good that the transformation effects, as well as all the others still hold up in today’s age of CGI blood, green screen and digital limb removals.

A widowed mother is troubled by her irritating son who thinks there’s a monster lurking in his house, turns out there is and it’s terrifying.

This isn’t your mainstream horror film full of cheap jump-scares, boring hot teenagers and loads of blood. It’s a thrilling, unsettling psychological horror that explores the more realistic, awful themes in life such as; grief, loneliness and depression.

It’s a very tense story that keeps you on the edge of your seat throughout its entirety, excellent cinematography, suspenseful sound design and terrific acting from Essie Davis who plays the mother.

Her performance was Oscar-worthy, expertly portraying the psychological horror she is going through. The son is a bit annoying and you will probably hate him which says what? Great performance that’s what. It’s a creepy, atmospheric, refreshing addition to horror genre.

A recently-deceased ghost couple want the new residents of their old home gone, how are they going to do this? Hire someone who specialises in getting rid of humans.

This movie is gloriously bizarre in a good way. It’s very imaginative and funny, with great humour littered throughout and some impressive visuals. Upon first viewing you’ll probably think this film is mental, but it’s a dark comedy with jokes that land constantly.

Michael Keaton was an awesome choice for Beetlejuice, he’s a great comedic actor with spot-on timing and the right amount of arrogance, sleaziness and charm. To sum him up he’s like the guy you’d have a great time partying with once, but then avoid at the next bash. The rest of the cast were all brilliant and Tim Burton’s direction was spot-on.

There’s talks of a sequel but with such a long gap between the two flicks, it’s got me thinking whether it’ll work or not. Hopefully it captures the craziness of the original whilst building upon the source material.

Four interwoven stories that happen on Halloween; a school principal moonlights as a serial killer, a group of teenagers pull a mean prank, an old man is tormented by a demonic trick-or-treater and a virgin goes on a search for the perfect guy.

This is the perfect Halloween movie. It is an amazing horror film that completely embodies the spirit of Halloween. It’s all about being a kid hearing urban legends, following Halloween traditions, parties, trick or treating, jack o lanterns it has everything lovers of this holiday could want. It is equal parts creepy and terrifying as well as charming and fun.

The stories are seamlessly blended, and the constant appearance of the sack-headed demon child Sam reminds us all to respect the Halloween traditions. The film looks great, every shot is well framed and executed. Add in great performances for the whole cast, realistic dialogue and funny humour that never goes over the top.

How this movie was a direct-to-DVD I will never understand. It has sharp, clever storytelling, amusing comedy, creepy imagery, solid gore and it’s insanely fun. What more do you want?

There you have it. Ten great movies to watch this Halloween, so grab your mates, a big bowl of popcorn, ignore the trick or treaters demanding sweets and have yourself a movie marathon.