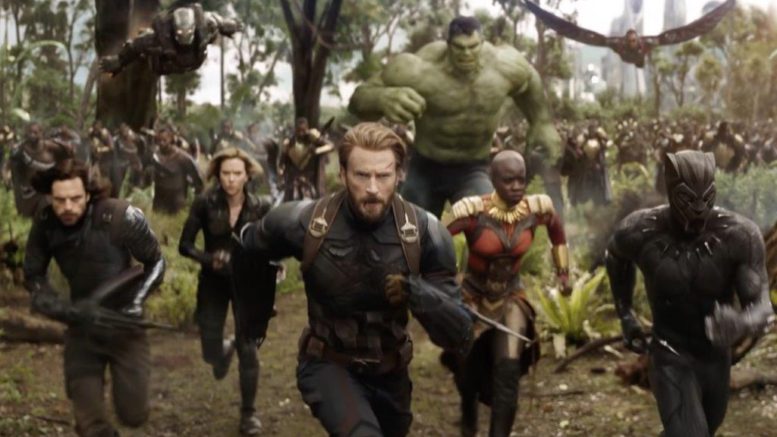 We have seen a lot of great movies in 2017 and with a only a couple weeks left of the year, I can’t help but look ahead to next years offerings.

From plenty of big budget superhero movies, to long-awaited sequels, to interesting original ideas. It is safe to say that 2018 is going to be a stellar year for cinema goers.

This list will look at some of my most anticipated movies and when you can expect to see them on the silver screen. They are in no particular order.

The next instalment in the ever-growing Marvel Cinematic Universe (MCU). This time we catch up with T’Challa/Black Panther (Chadwick Boseman) as he returns home to Wakanda to succeed the throne after his father’s death in Captain America: Civil War.

He was definitely one of the coolest things about Civil War and his acrobatic fighting skills are on display once again in the trailer. Expect some amazing fight sequences and impressive visuals from this one. It also bolsters a talented cast including the likes of; Danai Gurira, Lupita Nyong’o, Daniel Kaluuya and Michael B. Jordan. A thrilling movie that is sure to wet our beaks before Avengers: Infinity War arrives in May.

Jason Statham has beat the crap out of a lot of people over the years but this time he takes on a shark! Sign me up! This story follows Jonas Taylor (Statham) who, after an attack by what he claims was by a 70-foot shark, must confront his fears and save a trapped sunken submersible.

The Megalodon is an extinct species of shark that lived approximately 2.6million years ago, with fossil remains suggesting this giant beast could reach lengths of 59ft. My biggest concern for this one is that the shark is going look terrible as it’s a big task CGI-ing something of that size.

I’m hoping it turns out looking more like The Shallows instead of Sharknado. A trailer is yet to be released but the cast looks pretty good so far, including the likes of; Ruby Rose, Rainn Wilson, Cliff Curtis and Bingbing Li.

Here comes the second attempt at transitioning one of the most famous heroines in gaming history to the big screen. At least this time they look like they are basing the movie on 2013’s rebooted video game, with a lot of the scenes from the trailer mirroring moments from the game.

Alicia Vikander stars as Lara Croft and she has nailed the look of the character. The action looks pretty spectacular and the supporting cast is solid, including Nick Frost and Walton Goggins.

The video game took the approach of turning a fragile woman, who has never killed before, into an expert survivalist. Whereas, this film looks like they’ve skipped that and started her off as a badass. Not sure if that’ll work but we’ll find out in March.

Who doesn’t want more Jaeger/Kaiju beatdowns?! Not sure how long after the original this one picks up, but it features John Boyega as Jake Pentecost, son of Idris Elba’s Stacker in the original, leading a new generation of Jaeger pilots against a new Kaiju threat.

I loved the first one. Yes, the acting wasn’t great, but you got to see giant robots beat the crap out of giant monsters…it’s hard not to enjoy that! The action in the trailer looks jaw-dropping and will definitely be worth watching in IMAX.

Boyega also gives another rousing speech which is always a good way to get you pumped and a few familiar faces make a return. I’m very excited to see another one of these and I hope they keep going with them after this one.

I spoke about this one in a previous list, but they recently dropped a new trailer that detailed more of the story and it was littered with even more pop culture references including; Chucky, Mortal Kombat, Battletoads, King Kong, Thundercats and many more.

This Steven Spielberg directed film tells the story of when the creator of a virtual reality world dies he challenges all players to find an Easter Egg in the game and whoever finds it earns his fortune. This movie looks insane. My only concern is that it is going to rely heavily on CGI, which doesn’t always go down well.

However, a tight well-told story, chaotic action scenes and seeing all these iconic characters on screen together could make this one of the most enjoyable movies of the year…and we’d only be in March!

This is the first superhero horror film in the genre. That’s something to be excited about, well I am anyway. The story follows five young mutants, who have just discovered their abilities while held in a secret facility against their will, and they must fight escape. The trailer features a very chilling rendition of Pink Floyd’s Another Brick In The Wall, as well as some good jump scares.

There is some serious talent in the cast as well including; Maisie Williams, Anya Taylor-Joy, Charlie Heaton and Alice Braga. It looks like we are going get some incredibly tense moments and some great superhero action. A different approach for a Marvel superhero movie but hey it’s not part of the MCU so it won’t affect its reputation.

With over 98million views and counting, it is safe to say that the internet lost their mind when this trailer was released. The Avengers are back, and they’ve got a few new friends to help them take on the biggest of the baddest, Thanos. When that theme kicked in, I fist-pumped big time.

They’ve been carefully crafting this universe for 10 years now, so when each character popped up you couldn’t help but get excited (“get this man a shield”). Seeing all these heroes interact is going to be mad and I can’t wait.

Thanos better be a good villain as he’s been hyped up for a number of years now. The action looks amazing and it’s once again directed by the Russo brothers, Anthony and Joe, who brought us two of the best Marvel films in Captain America: The Winter Soldier and Civil War.

This is my most anticipated horror film of the year because I’m so intrigued by it. This trailer should be the benchmark for how all trailers should be made because after watching it, and it’s a solid two minutes long, I still don’t really know anything about it.

Directed by and starring John Krasinski, of US Office fame, alongside his real-life wife Emily Blunt. It’s a great concept for a horror film which makes me think that sound design is going to be at the forefront.

The trailer sees this family living in complete silence. They make and walk on sand trails, they use sign language to communicate and they play board games with soft game pieces as they never want to make a noise. It looks tense, thrilling and the horror on the characters faces means we’re going to get some good acting. Fingers crossed I’m right.

A trailer where Deadpool (Ryan Reynolds) impersonates Bob Ross, painter and TV host of 1983’s The Joy of Painting, sent the internet into hysterics when it was released.

We don’t really know much about the film, but we have a couple of superhero debuts in Domino (Zazie Beetz) and Cable (Josh Brolin), and a new director in David Leitch. This man directed the brilliant Atomic Blonde and produced the John Wick movies, so this guy knows action.

Although we don’t know much, what we know for certain is that we can expect more hysterical comedy, incredible actions scenes, hilarious fourth-wall breaking and more memorable characters, as well as some notable returnees…I’m looking at you Dopinder.

The Parr family are finally back, and it only took 14 years but who’s counting…The teaser we got for this one was less than a minute long but that was enough to get everyone hyped.

The cinemas are going to be filled with more adults than kids for this one as we’ve been waiting so long for it. This is for all the 2004 kids who watched the cliff-hanger of the original and got so excited for the sequel, only to have to wait over a decade for it.

All our favourite characters are returning and all we know about the story at the moment is that Bob Parr/Mr Incredible (Craig T. Nelson) is left to care for Jack-Jack while Helen/Elastigirl (Holly Hunter) is out saving the world.

Samuel L. Jackson is back as Frozone and the veteran voice actor John Ratzenberger reprises his brief original role as the Underminer. I’ll call it now…Incredibles 2 will be in top three biggest earners at the summer box office next year.

Not much is known about the plot for this instalment in the Predator franchise, but it is said to be a sequel to the 1987 original and not a reboot. Shane Black is on board to direct, he also directed Iron Man 3, The Nice Guys and starred in the original sci-fi action film. One of the ways they were going to get Black on board was if they agreed to one of his conditions.

He explained: “I made a condition of my participation with Predator, that it be the same rating as the first movie, and the first movie was rated R. In other words, I don’t want to cut away every time the Predator does something violent.”

That’s what you want to hear as a Predator fan! The film has a solid cast on board as well including; Keegan Michael Key, Olivia Munn, Boyd Holbrook and Thomas Jane. Hopefully we get a trailer soon, so we can see exactly what type of movie we’re in for come August.

I believe this to be the only DC movie coming out next year. Which may or may not be a good thing. It’s directed by James Wan which has me excited already because he has shown countless times how good he is with a list of great horror films like; Conjuring 1+2, Insidious, Dead Silence and Saw. As well as this, he has also shown his talent for big action blockbusters such as Fast and Furious 7.

Jason Momoa is back as Aquaman, and he is joined by a very strong supporting cast including; Willem Dafoe, Amber Heard, Nicole Kidman, Temuera Morrison and Patrick Wilson. The story follows Arthur Curry as he learns he is the heir to the Atlantis and must step forward to lead his people, becoming a hero to the world.

I can already see this being better than Batman vs Superman, Suicide Squad and Justice League combined, why? Because it has a better, more talented director behind the camera. Why was Wonder Woman so successful? Because it was handled by a different set of eyes, very talented eyes in Patty Jenkins, instead of Zack Snyder. This is becoming a common phrase for DC movies, but this could be the one to save the universe.

I’ll end this list with a few honourable mentions. Movies that have peaked my interest but until we get trailers or more details, not enough to make the list.