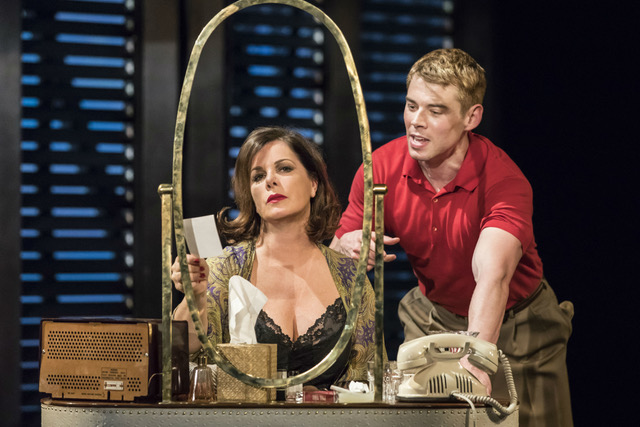 Clearly, Marcia Gay Harden is anything but a washed-up, over-the-hill actress. And evidence of her considerable stage craft demonstrated as much as she portrayed such a character in Tennessee Williams’ Sweet Bird of Youth, currently at Chichester Festival Theatre (until June 24).

Yet so plausible was she as such, in the guise of ageing Tinseltown screen star Alexandra del Lago, it is entirely conceivable to believe she has drawn deep on her own emotional well for the role in this, her UK theatre debut.

Alexandra, travelling as Princess Kosmonopolis, is on a drink-and-drug-fueled road trip to nowhere in particular to escape what she mistakenly believes are bad reviews of her comeback movie; and with her she has hired, hunky help in the form of one-the-edge, one-time actor-turned-gigolo Chance Wayne (Brian J. Smith).

The drama, directed by Jonathan Kent, unfolds as they wake in a seaside resort that is the hometown of Chance, and the setting for a dreadful wrong he did the daughter of the town’s cigar-chomping political head honcho ‘Boss’ Finley (Richard Cordery).

When news of Chance’s return spreads, the threat of a vicious and emasculating revenge lurks as he confronts his past, while Alexandra starts to have feelings beyond the boudoir for her young stud until a phone conversation with a tabloid critic offers fresh perspective on her celluloid future.

Paul Newman played Chance with great intensity in the Hollywood film of Williams’ play and, dare it be said, Brian J. Smith’s visceral performance showed glimpses of that level of star quality as he wrestles with a corrosive love for the Boss’s daughter and the fading hope of Hollywood fame on the coat tails of his older lover.

The casting must have been testing, given the complexities of the characters and their relationships, but the connections are made, and done so well. Plenty of careful and worthwhile thought has gone into the set design; it must have been a challenging task to transport not just a geographical location but remnants of an epoch to the stage.

Also cleverly done was the lighting (pay attention to the all-important blinds); and the use of video (a simple yet effective way to bring a stirring, spiteful Deep South-style political rally to the stage) satisfyingly complimented the production.