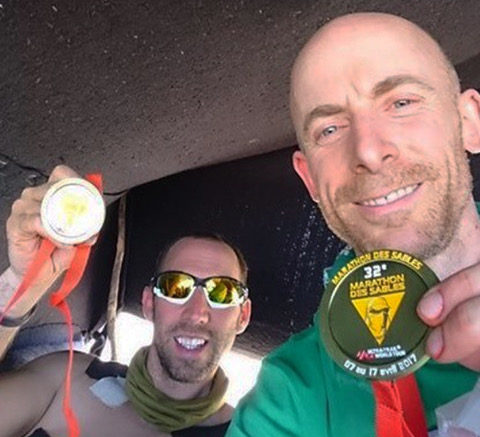 A super-fit firefighting duo have praised scientists from the University of Chichester for their help during a gruelling 156-mile footrace in the Sahara desert.

Graham Dance and Steve Holder returned triumphant from the harsh conditions of the Marathon des Sables in northern Africa. The firefighters, who raised thousands of pounds for charity, undertook specialist acclimation preparation with experts of the University’s Sport Performance and Rehabilitation Unit, which provides innovative training.

Graham, 34, said the key to coping with the heat and sand was the fitness planning with Andy West, a Senior Lecturer in Sport and Exercise Physiology. The runners, who are part of Red Watch at Havant station, completed sessions in the University’s heat chamber which replicated the Sahara conditions.

He added: “MDS was brutal, amazing, exhausting, and brilliant – it is sold as the hardest foot race in the world and would be hard to argue against that theory. The acclimation training at the University was very professional and without doubt aided us in our preparation for the desert environment, which peaked at 54-degrees centigrade. We were able to maintain our efforts throughout the extreme temperatures, surely due to our heat acclimation training.”

The climate chamber is intended for athletes who walk, run, cycle, and row around the globe to replicate temperature and humidity from minus 20 to plus 50 degrees Celsius and from ten to 90 per cent respectively. It can simulate altitudes of up to around 22,000 metres by reducing the oxygen concentration in the room from approximately 21 to nine per cent.

Andy West, who specialises in exercise physiology, is part of the Sports Performance and Rehabilitation Unit at the University. He said: “Repeated exposure to the heat helped Graham and Steve’s bodies slowly adapt to the heat, in this instance the heat of the Sahara desert.

“This type of training is designed to increase core and skin body temperature, induce high levels of sweating and increase skin blood flow. All of these responses stimulate physiological adaptations which improved the men’s tolerance to exercise in the heat and reduced their chances of suffering from heat illnesses, such as heat exhaustion.” 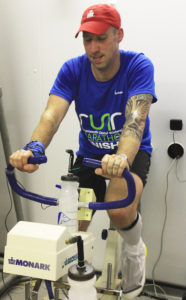 The Marathon des Sables is a multi-stage 156-mile race and the equivalent of six marathons across the same number of days. Competitors must be self-sufficient for everything apart from water and carry 11kg backpacks with bedding, food, anti-blister kits, head torches for running at night, and other equipment essential to completing the race.

Firefighter Graham has been racing in endurance events for around eight years and MDS was top of his bucket list. Colleague Steve ran 20 marathons last year to raise money for charity in memory of his wife, Sharon, who sadly passed away two years ago. During the University sessions, technicians monitored the men’s core body temperature, heart rate, fluid intake, and sweat rate so their acclimation response was maximised while ensuring their safety.

Graham said: “A huge thank you to the University of Chichester, I have raised somewhere between £3,000 and £4,000. I chose two charities for very personal reasons: St Wilfred’s Hospice took care of my Mum two years ago and gifted her final wish to pass away at home with her family, something that would have been near impossible without their help and support.

“I also chose St Richard’s hospital neonatal unit as they gave lifesaving care to my son Sebastian who was born prematurely in January this year unable to breathe. Both gave amazing care at different ends of life and both rely heavily on charity to maintain their wonderful care.”

To find out more about how University of Chichester is working with athletes to help compete in worldwide events contact Andy West at a.west@chi.ac.uk.