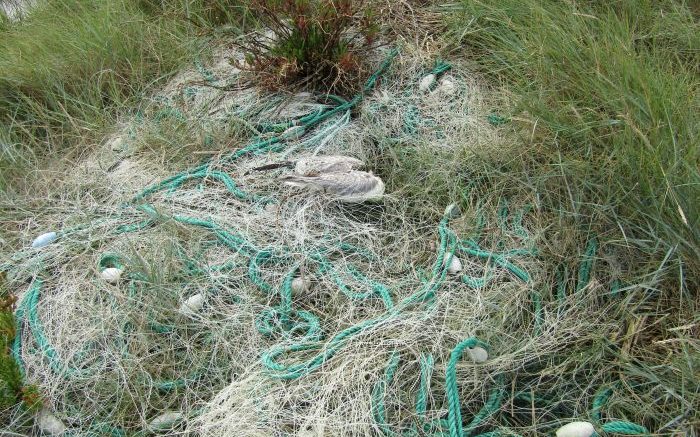 Chichester Harbour Conservancy’s Keith Rathbone has spoken of his dismay after discovering a dead gull caught up in discarded fishing nets.

Countryside ranger Keith made the horrific find during a kayaking trip with friends to Fowley Island and has revealed he immediately organised a work party to clear the discarded nets.

Writing on the website of the Chichester Harbour Conservancy, he explained: “I went kayaking with some friends from Emsworth out to Marker Point to see the seals and on our way back we stopped off at Fowley Island for a swim. To my dismay, I discovered a dead Gull that had been caught up in discarded fishing nets.

“Back at work I immediately organised a work party to clear the discarded fishing nets off Fowley Island. We have to go back on the next spring tide as there is still a lot of netting to be removed.”

Keith has also told of his work dealing with other problems that have cropped up. He added: “Lots of footpath infrastructure seems to have failed over the summer period, some due to vandalism other just due age and constant use. I’ve replaced two 8ft Kissing gate posts in Fishbourne Meadows, another gate post at Ella Nore.

“I have almost completed phase two of the Fishbourne Meadows Boardwalk programme. It’s been a race to get into the meadows after we had cattle removed from grazing the site and between the rainy periods, to install the new sections of boardwalk.

“The new section will improve access between the two main fields then onto the small concrete bridge section. Please go down and try out the new boardwalk.”

And he made special mention of the the volunteers from the Friends of Chichester Harbour, who “have been out with us in full force accomplishing an amazing amount of work for their hard efforts. I know I say this regularly, but the help they offer us both financially and the physical man hours are hugely appreciated by us at the Conservancy”.