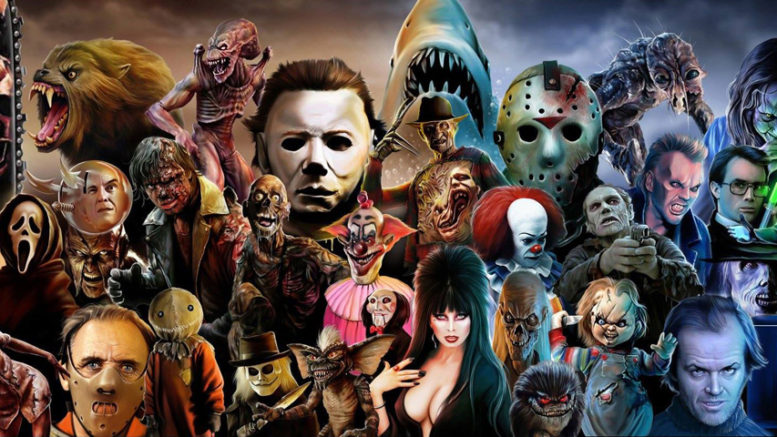 Happy Death Day is the latest slasher horror to hit the big screen and it follows a student who must keep reliving the day of her murder until she finds her baby-mask killer. The release is just around the corner and I am excited so I thought…great time for a horror movie villain list…naturally I have chosen 13 of the best or are they the worst… Enjoy! 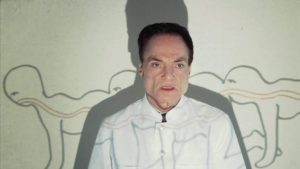 This is a guy who enjoys sewing people together, butthole to mouth…where did this idea come from?! He is frightening; ice-cold, cruel and doesn’t give a crap (pun intended) about his captives.

His motives are non-existent which makes it that much more brutal the way he treats these people. The only reason we get for him wanting to produce this eyesore is because of the death of his ‘3-dog’, I think you can guess what that was. 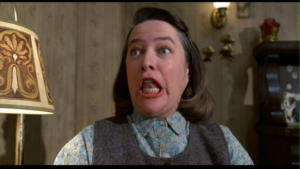 An Oscar-winning performance from Kathy Bates who played the deranged, psychotic, cock-a-doody crazy Wilkes. Her performance took the term “superfan” a little too far when she rescued her favourite author from a car crash.

Her behaviour is increasingly more erratic and unhinged, making for an intense experience. Don’t ever let her pick up a sledgehammer. 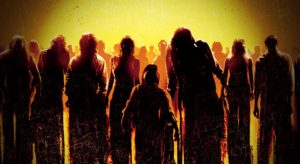 I’ve categorised zombies instead of picking just one, as it’s impossible! The influential flick was George A. Romero’s Night of the Living Dead (1968), but zombies have shambled their way into modern pop culture and are now as popular as ever. Seeing these brainless, undead walking (or in the more recent movies, running) corpses chow down on a helpless victim is always horrifying to watch.

There have been many great ones over the years including the likes of; Shaun of the Dead, Zombieland, REC and my most recent favourite Train to Busan which I urge every zombie fan to watch! 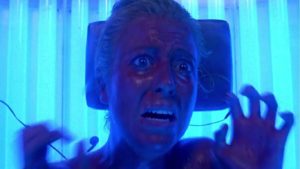 You may question whether Death counts as a villain but considering the ways in which the characters meet their maker, you can’t help but think Death is enjoying himself way too much. The first gave us a very interesting concept that hadn’t been explored at that time, the sequels did get more and more elaborate and ridiculous with its kills but that’s what made them so enjoyable. They went from “accidental choking from shower wire” in the first one to “escalator blender” in the fourth one. Bit of a realism jump if you ask me.

This is among my top ten favourite movies and for good reason. The practical special effects are absolutely outstanding, so much so that they look more impressive than most CGI I’ve seen and they even make even good practical work look average in comparison. Not knowing who was real and who wasn’t only added to the creep factor.

The iconic defibrillation scene, the head that turns into a spider, the inhuman scream that echoes as the thing is set ablaze still gives us nightmares to this date. I’ve re-watched this film countless times and I still don’t really know what happened at the end, the ambiguity of the final scene still has us wondering to this date. 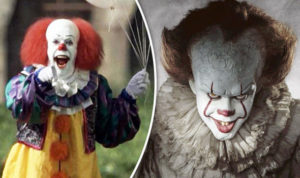 An ancient evil entity that takes the form of a clown so it can easily lure kids to their death. Pennywise terrorises a group of teenagers, in both the 1990 TV miniseries and the 2017 reboot, by taunting them with the biggest fears.

Tim Curry portrayed the child-eating clown first fantastically, he was funny, creepy and unpredictable. Bill Skarsgard had some big shoes to fill, and fill them he did. He lacked the humour of Curry but he has single-handedly made clowns scary again.

If I see a single red balloon I get a little creeped out, and I certainly won’t be letting my future child craft a paper boat and sail it through the rain soaked gutters. 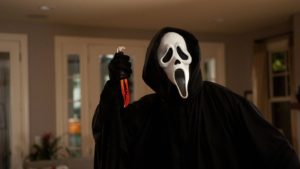 Ghostface is known for his signature Halloween mask and tendency to taunt his victims and draw out the act of murder. What’s good about it is that it’s not a single villain for the entire series. Instead, each film has a different killer and the mystery revolves around who has donned the costume and started a new process of offing young, dumb, attractive people.

Ghostface terrorises the town of Woodsboro by killing any teenager he can get his hands on, in progressively violent and creative ways. The phone calls give the villain a personality, and the ghostly image of him chasing you up the stairs will induce fear whenever you turn the downstairs light off. While the third one is a steaming pile of faeces, the other three flicks are rather enjoyable. 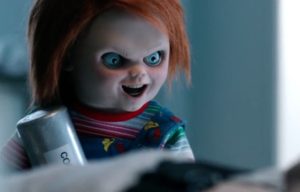 Chucky is a doll possessed by serial killer Charles Lee Ray. After evading death, Ray was forced to transform his soul into the doll, now he needs a new body to possess.

Dolls are insanely creepy, I think it’s something to do with their big, glassy eyes and almost human-like features that gives people the creeps. What’s worse than a doll? One that comes to life and tries to kill you.

Chucky loves spouting out one-liners, and while his size alone seems to be a bit of a joke in itself, seriously though how does anyone get overpowered by this doll?! This killer’s fruitful murder spree shows that size doesn’t matter. Often creative with his kills and very unpredictable.

With his last two outings going straight to DVD, with Curse of Chucky being a surprisingly good time, I’m hoping he makes his way back to the big screen for one last time. 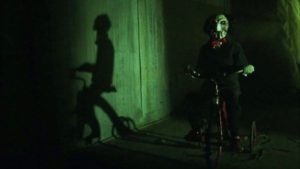 If you really think about it, John Kramer, aka Jigsaw, doesn’t actually kill anyone; instead he traps his victims in increasingly more elaborate scenarios designed to make them appreciate life, if they survive of course, which is rare.

The death traps he creates on the other hand are sadistic, brutal and downright horrific, but what makes him such an interesting screen monster is his curious moral code, why he does what he does.

He has a very chilling voice, especially when its coming out of the nightmare-inducing, tricycle-riding doll of his. Although the later sequels decreased in quality, he was still a very creative and iconic horror villain, and in a world of remakes and sequels it was good to see something fresh and original.

This film made it onto my top ten horror movies of the last decade list and for good reason. It produced one of the most original, scariest horror “villain” in recent movie history.

The entity is basically a sexually transmitted disease that constantly follows you until it kills you. It can look like anyone, you can pass it on, but if it kills them it’ll come back for you. Avoid places with one exit and never go to sleep again, you’re basically screwed.

What made it so terrifying was the fact that it could look like anyone, a face in a crowd or someone you knew, but it was always walking towards you. The sense of unrelenting death following the characters everywhere they went made it a very tense film.

After watching this film you’ll think every person walking towards you is a merciless sex demon coming to kill you. 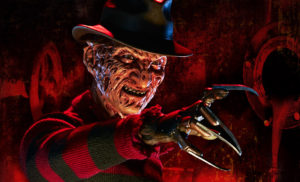 Freddy first showed up on our screens in 1984’s A Nightmare on Elm Street and since then has enjoyed a long career of disturbing innocent people in their dreams. His striking visual design is iconic with his scarred and blemished face, the razor-sharp knife glove, the ragged sweater and hat.

Wes Craven first came up with the idea for Freddy using a mix of real-life experiences and an idea; he once had a creepy encounter with a homeless man whose look he would base Freddy’s on, couple that with the idea about a monster who could operate in the dreamscape, resulted in a terrifying concoction, perfect for a horror film.

The first and last appearance of Freddy portrayed the character as a cruel, truly sinister, cold-blooded killer who prayed on kids. However, the sequels made the kills more outrageous and Freddy became more comedic than scary. 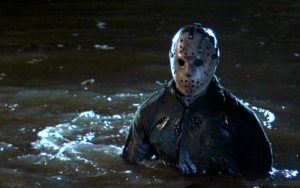 Jason is one of the most instantly recognisable horror icons ever produced on the big screen. This hulking mass of a man is a vicious killer who conceals his hideously deformed face behind a hockey mask and wields a big-ass machete.

No one is more skilled at butchering pretty, brainless teenagers in a variety of brutal and ruthless ways. A personal favourite of mine is Part IV when Crispin Glover’s character gets a corkscrew in the hand and cleaver to the face.

Jason seemingly can’t be killed, drowning him, electrocuting him, strangling him or even finishing him off with his own weapon won’t do the trick. His thirst for teenage blood has taken him to New York, space and even Elm Street for a face-off with Freddy Krueger. 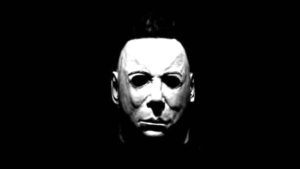 Michael Myers is the pinnacle of slasher movie villains. He embodies pure evil, he is an unstoppable, remorseless, killing machine, with eyes resembling a black abyss staring right back at us.

Much like Jason, Myers enjoys offing teens in their dozens, but his weapon of choice is a butcher knife. The mask, modelled off William Shatners face (you can’t unsee that now), was an interesting choice but it worked to perfection. His blank stare was enough to send shivers down your spine.

After killing his sister, Michael is sent to a mental institution where he escapes (shock), returns home to terrorise and scare the crap out of scream-queen Jamie Lee Curtis in a movie that truly breathed new life into the slasher sub-genre.

With the news that Curtis will be returning for another instalment, it’s safe to say that Michael will be back to terrify a new generation.