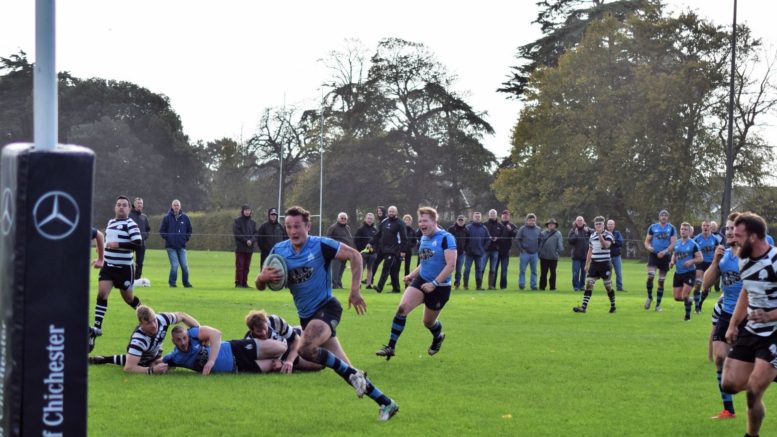 Young winger Cameron Hopkins made a name for himself with a hat-trick of tries on his debut as Chichester secured a 50-17 victory over Thurrock. The hosts put on an impressive display in this exciting London and SE Division match.

Chi made it six wins from seven with a brilliant performance that took the Oaklands Park unit to third in the table. This win sees them now level on points with second-place CS Rugby and keeps them hot on the heels of league-leaders Medway.

Harry Seaman opened the scoring after just eight minutes, when he crashed down over the line following a good kick forward from Henry Anscombe and two lineouts. Hopkins then doubled their lead with his first try of the day.

A clever pass from Anscombe was taken by Ben Robson who charged across the line to score. Converted. Following some fine passing, Hopkins scored his second try comfortably.

Another attack from Chi resulted in Charlie Wallace going over the line to score. A good pass from Robson allowed Wallace to score his second giving the hosts a thumping 38-0 lead. Thurrock showed good hands and failed tackles from Chichester meant the visitors got one back before the half.

Chris Johnson added another try for the home side, extending their lead. The visitors then added two consolation tries but it wasn’t enough as Hopkins received the ball and drove forwards, scoring his third of the day. Game over.

Chi will look to continue their fine form and close the gap at the top when they travel away to ninth-place Chobham on Saturday.