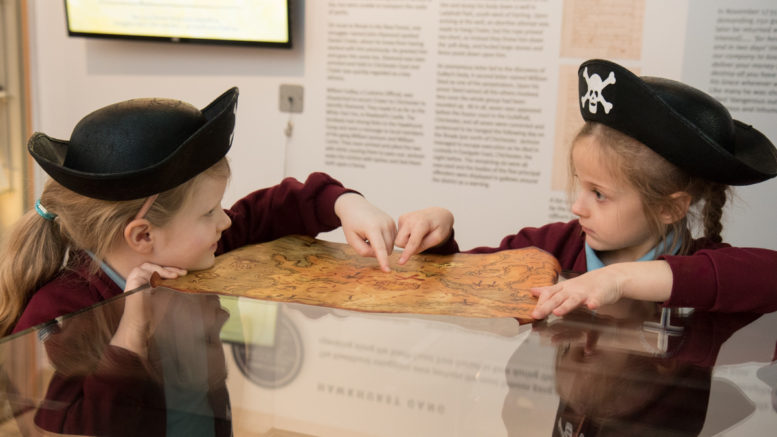 Primary school children are set to experience life as a smuggler for the night after winning a competition run Chichester’s Novium Museum.

Daring double escape, coded messages and smuggling a giraffe out of a circus are some of the ingenious and creative stories submitted for this year’s writing competition.

Budding authors, aged between seven and 11, were prompted to take inspiration from the museum’s new exhibition, Cutlasses & Contraband; A Smuggler’s Tale, asking the question: “If you could be a Smuggler and take part in an adventure, what would you do?”

Five top prizes of a sleepover at the museum for each winner’s class were on offer, thanks to funding from the Heritage Lottery Fund’s Sharing Heritage grant.

Creative writing expert, Greg Mosse, and his wife, novelist Kate Mosse, agreed to judge this year’s entries.  Greg said: “Kate and I were very honoured to be asked to judge the creative writing competition. The stories all capture the thrilling nature of the life and death struggles of the 18th century.”

Sophie Sappleton and Charlotte Vickers from Hampshire, and Millie Boulter, Lottie Hodges and Leo Malan from West Sussex were selected as overall winners.

Chichester District Councillor Eileen Lintill said: “The standard of writing was exceptionally high. We received more than 300 entries this year, and it’s wonderful to see how many talented young children were inspired to write. We would like to thank Greg and Kate for taking the time and using their expertise to judge the entries.”

Here is what Greg and Kate said about the winning entry from Leo Malan of West Dean Primary School, Chichester: “Finally, we thought that the story entitled ‘The Hawkhurst Betrayal: Eye of Nefertiti’ was very clever. The whole thing takes place in the mind of a jewel smuggler, standing on the beach at night with the noise of the sea and the shingle. It is a very evocative internal story.”

Cutlasses & Contraband; A Smuggler’s Tale at The Novium Museum is open now and showcases the untold stories of local smugglers and their victims in the Chichester District.

The free exhibition features an illuminating set of objects from the museum’s own collections such as a cutlass, a smugglers talisman and copper printing plates which tell the story of the Hawkhurst Gang’s raid on Poole Customs House.

Chichester Community Theatre is producing Greg’s play entitled ‘The Hawkhurst Gang’ in Priory Park and at the Weald & Downland Living Museum, this summer.

The Novium Museum is also hosting Smuggling Saturdays  until 10 March 2018. Funded by the Heritage Lottery Fund, families can take part in the free activities which include interactive storytelling, craft and handling objects between 11am and 3pm.