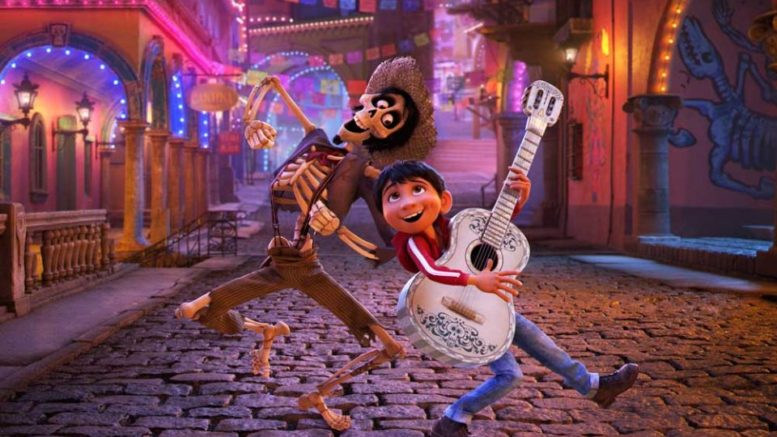 Once every year, our ancestors come back to our world to see family and friends. But no living person has ever visited their world…until now.

Coco (PG) is the latest creation from Disney Pixar and tells the story of Miguel, an aspiring musician who wants to follow in the footsteps of his great-great-grandfather, Ernesto De La Cruz (Benjamin Bratt), despite his family’s ban on music. But after a series of events, Miguel finds himself in the Land of the Dead where he embarks on a journey to discover the real story behind his family history.

Disney Pixar have mastered their craft, despite following the same formula for years (if it ain’t broke don’t fix it). The animation is, once again, mind-blowing. Every little detail is realised, right down to the chin hairs on Mama Coco’s face and the colours of both the Living World and Land of the Dead are so vibrant, fully immersing you into the movie.

As with every Disney movie there is an underlying message and with Coco, it’s family. They really knock it out of the park with the whole idea of the importance of family and remembering your ancestors. Another thing Disney are famous for is their tear-jerking moments and there are definitely a couple in Coco.

Another thing this film does really well is tackle a dark topic such as death in a fun and entertaining way, that is suitable for kids. Having the film set during “Dia de los Muertos” (Day of the Dead) was a great idea because it’s about remembering those who have died and supporting their spiritual journey.

There are quite a few funny moments for the kids and adults, so parents fear not…there are some jokes in here for you. It’s as if Disney are making these films with adults and parents in mind now.

The characters are voiced brilliantly, making them very memorable. Anthony Gonzalez (Miguel) does a fine job as the lead and Gael Garcia Bernal (Hector) is fantastic as his travelling companion. The soundtrack is amazing as well, featuring lots of great toe-tapping songs that suck you further into the movie’s world.

Overall, Coco is one of the best Disney movies ever made. It’s as simple as that. Go and see this movie, you will not be disappointed. A shoe-in for Best Animated Feature at the Oscars.