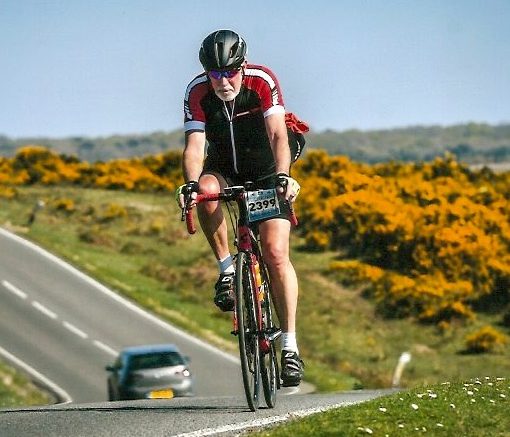 Retired pilot Graham Watson maybe approaching 70 but shows no sign of slowing down – with the Chichester resident preparing to celebrate his milestone birthday by completing his first-ever 100-mile cycle challenge.

Graham, who lives in Aldingbourne, will be among the 15,000 riders of all abilities taking on the inaugural Vélo South closed-road sportive on Sunday, September 23.

He turns 70 just ten days later and is using the event, which will take cyclists through stunning West Sussex countryside, as a platform to thank the British Heart Foundation, an organisation that has played a pivotal part in keeping him healthy and is also one of Vélo South’s Lead Charity Partners.

Graham, who left the Royal Navy in 1989 after 24 years’ combined service as a chief petty officer, air crewman and search and rescue diver, was diagnosed with an irregular heartbeat in 2013. The news came some 20 years after his mum Betty underwent a lifesaving triple heart bypass operation.

“After leaving the navy I became a commercial pilot and during a medical to update my licence, they detected an anomaly caused by the narrowing of a blood vessel,” explained Graham, who flew for the police and air ambulance company before retiring.

“Fortunately, they spotted it early and I’m on medication to manage it. My mum went onto live for another two decades after her major operation, until Alzheimer’s took her five years ago. The BHF does such a fantastic job and it’s great to be riding Vélo South for a charity that helped to keep us both alive.”

Although all general entry places for Vélo South have sold out, West Sussex residents who missed out are being offered a second chance to ride after organisers created a limited number of places for participants who live on or near the route. Email hello@velosouth.com with your details to find out more.

Vélo South is expected to raise millions for local and national charities and prospective participants can also enter through one of the event’s lead charity partners – BHF, Alzheimer’s Society, Age UK, and Restart Rugby – or via the Vélo South Business 100 challenge, which offers VIP networking opportunities and training events for corporate teams.

With around 1,700m of climbing, Vélo South is relatively challenging, but the beauty of the route, including the rolling hills of the South Downs National Park, and support from local communities will make for an unforgettable day of closed-road riding.

Entrants are travelling from all over the country and abroad to take on Vélo South and Graham, a latecomer to cycling, believes the route’s stunning countryside will help put the area on the map.

“I didn’t start cycling properly until I turned 64,” said Graham, who joked that anyone who tells him to slow down ‘at his age’ will get short shrift!

“My partner Debbie and I used to go cycling on holidays but got fed up not being able to do it during the winter months, so I bought a road bike.

“I’m not fast, but I go out on my own a couple of times a week and once a week with a friend – we do a good 30-50 miles – and I’ll be doing sportives around the 65-mile mark once a month to get me ready for Vélo South.

“I’ve cycled 84 miles before, but never 100. Vélo South’s last climb, up Harting Hill, does concern me because it comes near the end and I’ll be shattered by then, but I do like a challenge!

“I love cycling around here, we’ve got some beautiful roads. Cycling when they’re closed to traffic will be superb.

“Cycling is very accessible and social, whatever age you are. There are clubs popping up all over the place. It helps to keep you fit and it’s great to get out in the fresh air.”

On event day, Graham won’t be content cycling a mere century of miles: “I live five miles away from Goodwood, where Vélo South starts and finishes, and I plan to cycle there and back on the day, so I’ll be doing 110 miles in total!”

The BHF’s Liam O’Reilly said: “What a fantastic way for Graham to mark his 70th birthday, we wish him many happy returns from everyone at the BHF. Without the dedication and commitment of people like Graham, we wouldn’t be able to fund research that has broken new ground, revolutionised treatments and transformed the lives of millions of people in the UK.

“The stories of why our amazing supporters take part never fail to amaze me. I’m looking forward to seeing Graham and around 150 others take on this 100-mile cycling challenge for the BHF, which will help us put the brakes on heart and circulatory disease for good.”

Get the Lovebug! All-day music festival heading to Chichester College hits all the right notes!

Grad all over! Apprentices celebrate success at Chichester Cathedral ceremony