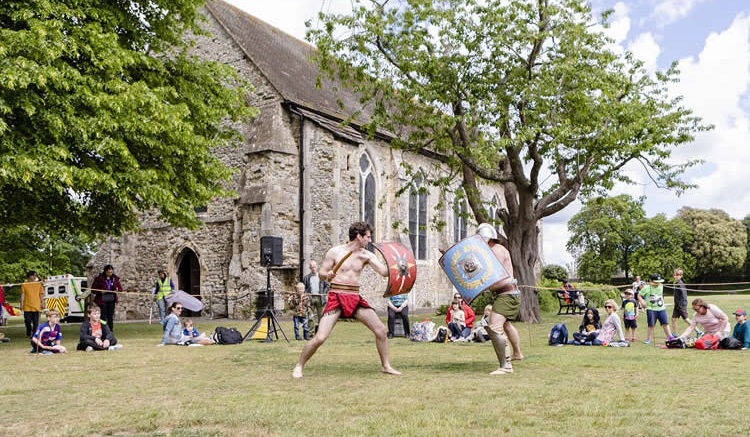 Chichester culture chief Roy Briscoe has told of his immense pride in the city after seeing the recent Roman Week being hailed as a huge success that “has become a much-loved celebration in our annual calendar”.

This years’ event, which ran between May 25 and 31, saw thousands of visitors attend thrilling events, all supported using public funding by the National Lottery through Arts Council England.

“We have worked really hard to make Roman Week 2019 the best yet. This year, more than 35 events and activities have been organised by a wide range of organisations for all ages in Chichester and beyond.”

Visitors took the chance to experience Roman life in action with events including a wonderful Roman re-enactment in Priory Park showcasing military and gladiator life in a fun way.

The events came during the same time that an archaeological dig took place in Priory Park. It saw Chichester District Council’s own archaeologist, James Kenny team up with volunteers from the Chichester and District Archaeology Society to develop the discoveries made last year of the well-preserved Roman bath-house — and to find a connection between the bath-house and the property that it once served.

Briscoe revealed that more than 2,000 people visited Priory Park to enjoy the Roman re-enactment and to watch archaeologists uncover the Roman secrets in the park, adding:

“During the day we spoke to people who had visited from London and beyond specifically to attend Roman Week. It was great to see so many families also taking the opportunity to picnic in the park and make the most of spending the day in the city.

“Chichester is renowned for its Roman history and we are very proud that Roman Week has become a much-loved celebration in our annual calendar. I’m very proud of the hard work and commitment of the team in delivering such a successful event.”

It was a busy time in the city and other events took place to mark Roman Week included guided tours, talks, walks, workshops and family activities. Then there was the Novium Museum’s exciting exhibition Hollywood Rome: Reel Life in the Ancient World, which allowed visitors to immerse themselves in the city’s Roman heritage. This visually stunning exhibition is open until 8 September and features costumes, props and posters from big name modern Roman epics, such as Gladiator, Centurion, and Ben Hur.

Peter Hayes, a visitor from Leicester, said he was delighted at being able to see the exhibition, adding:

“The Roman Week was fantastic and the exhibition was the icing on the cake. Well done to all involved in such a marvellous event.”