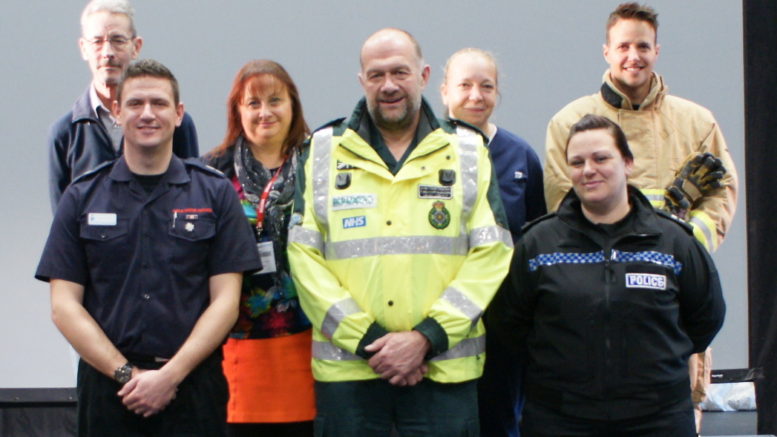 Students have been given a road safety presentation from a mother who bravely recounted how she lost her teenage son after he was knocked off his moped.

More than 2,000 students heard powerful personal stories combined with dramatic video footage to warn and educate young people about the tragedy and suffering that can be caused by road traffic collisions.

Among the speakers was Paula Skinner, whose son Joshua — who studied public services at the Chichester College — was tragically killed, aged 16, in a road traffic accident in 2005.

It was part of the safe drive stay alive campaign, a national road safety campaign which is run locally by West Sussex Fire and Rescue.

Firefighters, paramedics, police officers, bereaved parents and people who have been directly involved in traffic accidents recounted their stories, in heart-breaking detail, to groups of students aged 16-18 who will either soon be learning to drive or are new or learner drivers, in an aim to reduce the number of young people involved in serious accidents.

Lisa Humphries, student experience manager at the college, said: “This is an extremely powerful presentation, with some important messages for our students.

“The speakers are unflinchingly honest when they tell their stories, in great detail, about the way they have been affected by the ramifications of careless or dangerous driving.

“At the college, we experienced this first hand in 2005 when we lost Josh — he was a vivacious student who loved his course and had a bright future. However, that was cut short after he was knocked off his moped on his way home from work.

“It takes a lot of courage for Paula, and for those who take the stage, to talk about how they have seen their lives changed forever.”

Jackie Boyle, community fire safety manager at West Sussex Fire and Rescue, added: “We use the analogy that a road traffic accident has a ripple effect, similar to when you drop a pebble in a pond, and we tell the story of an accident through every stage.

“These are real people who have experienced the horror of road traffic collisions, whether as a member of the emergency services, as a victim, as a parent who has lost a child or even as the cause of the accident.

“One of our speakers was convicted for causing death by dangerous driving, having been found guilty of driving under the influence of alcohol. He talks powerfully about living with the repercussions of his actions and is passionate about ensuring people learn from the mistake he made. I have a lot of respect for his desire to come forward, to tell his story.

“We know this campaign affects those who attend and if these messages save just one young life, then it is absolutely worth doing.”