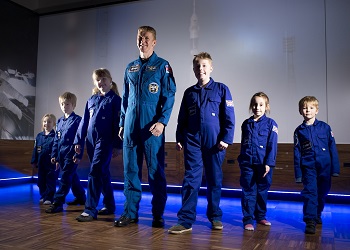 That’s because children can become “space explorers” next month at the popular venue as part of the national Museums at Night festival.

“Complete a space themed museum trail before taking our ‘rocket lift’ into space for a family friendly demonstrations in our Tim Peake Gallery and take part in themed craft activities as part of the Space Explorers event,” says a spokesman.

His mission proved to be an eventful and busy six months in space and in the first month after his launch he conducted a spacewalk to repair the sStation’s power supply together with NASA astronaut Tim Kopra. Other highlights of his mission saw him drive a rover across a simulated Mars terrain from space and he helped dock two spacecraft.

Tim took part in numerous experiments for ESA and international partners. Highlights include using the Space Station airlock to study Tim’s lungs, monitoring his sleeping patterns to learn how humans adapt to life without normal daylight, and recording how many calories he consumed to prepare for missions further from Earth.

The Museums at Night events take place twice a year. All UK museums, galleries and heritage sites to throw open their doors after hours to showcase their treasures in unexpected ways.