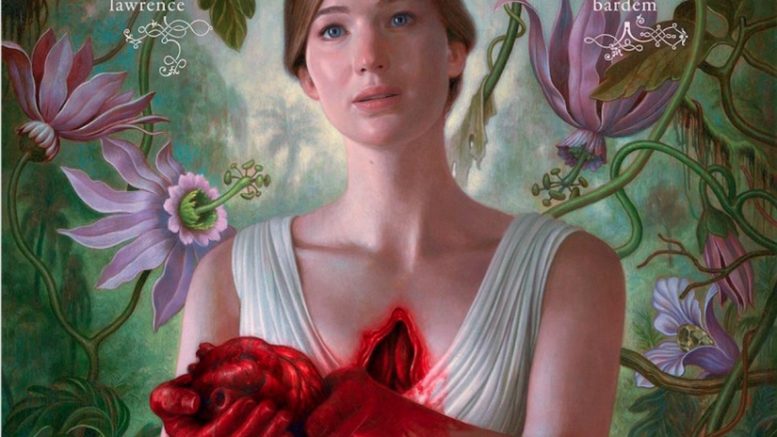 “Mother!” (18) follows the story of a couple (Jennifer Lawrence and Javier Bardem) who live in an isolated farmhouse. Their relationship is tested and their lives are turned upside down when uninvited guests arrive, that threaten their peaceful existence.

I need to talk spoilers for this film so the first half I will try to avoid them as much as possible, but then I will be going into spoiler territory in the second half.

All the acting was absolutely brilliant, but more specifically Lawrence as she was the main focus of the film. She is pretty much in every shot, most of the time through close ups and over the shoulder shots. This made me feel like we were watching the events unfold through her eyes. She was very reserved at first but then explodes into a real raw and emotional performance which I found amazing to watch.

I really liked the relationship between Bardem, Lawrence and the first two guests they meet, played by Ed Harris and Michelle Pfeiffer. It’s strange, it’s creepy and I was gripped from the first moment we meet them; who are they and why are they there?

Unfortunately it felt like two different films. With the first half being a creepy thriller. It then exploded into a chaotic onslaught of noise in the third act, with very unsettling and disturbing imagery.

Now it’s time to delve into the spoilers… about a third of the way through I understood the message this film was trying to say and it’s pretty much what every reviewer has said already, also recently confirmed by director Darren Aronofsky, so I apologise if you’ve heard this before.

Bardem is God, Lawrence is Mother Earth, the house is Earth and the people represent humanity. Like I said, a third of the way through I got this, the film then proceeded to beat me over the head with metaphors and symbolism with an incredible amount of biblical references. I felt like they made this film purposely so it could be used as a film studies topic to be picked apart and discussed.

The house has a heart and the more Bardem (God) and the people (Humanity) ignore and wreck the house (Earth), the heart begins to die, hurting Lawrence in the process. Until she snaps, kicks everyone out and sleeps with her husband. This makes her feel loved, wanted, and the heart starts to beat again. She gets pregnant, Jesus metaphor, and time goes by. Bardem writes a new book (New Testament) and all the people begin flooding back to the house to see him, worship him, and get blessed by him.

Lawrence once again is ignored until she gives birth in a private room upstairs. She won’t let Bardem hold the baby because she knows he’ll show the people and there’s no way she wants them getting their hands on her baby. This scene was incredibly tense. As she tries to stay awake his eyes are locked on her in a very creepy way. As soon as she lets them close for a split second, he grabs the baby and begins showing it to the people.

The people get their hands on it and kill it and eat it, which was one of the most shocking and grotesque movie moments I’ve ever witnessed. People actually got up and walked out it was that bad. Some of the imagery from then on was very hard to watch, so hard that I contemplated leaving myself, it was too much.

This film has received a lot of criticism and hate. This was definitely not a fun movie, rethinking it and sleeping on it still hasn’t confirmed what I actually feel about it. One thing for sure is that it is a film that will be talked about for years to come. If you’re interested by all the reviews and controversy then go see it, but if you’re looking for a fun time at the cinema, give Mother a miss.