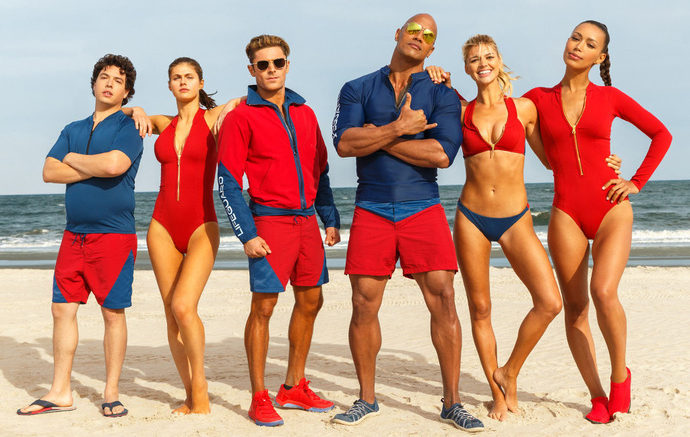 Scantily-clad lifeguards and slow-mo running makes a mediocre return, starring Dwayne Johnson, Zac Efron, Priyanka Chopra and Alexandra Daddario. Baywatch (15) is a remake of the 90s TV show and follows the story of Mitch Buchanan (Johnson) and his Baywatch team as they try to uncover a criminal plot that threatens the safety of everyone in the bay.

Firstly, the trailers showed way too much of the film, this resulted in a lot, and I mean a lot of the jokes not landing. A trap that other comedies such as Central Intelligence and Daddy’s Home fell into. When the majority of the good jokes were shown in the trailer, it resulted in long stretches of time where I wasn’t laughing.

There is one running gag in particular that got a big laugh the first time but when it’s reused another 10-12 times the joke became stale. The source of the comedy for me was Zac Efron, he has a great comedic presence and good timing, and Johnson got a few laughs out of me as well, but the rest of the cast felt underused, in favour of more Johnson and Efron, which wasn’t always a bad thing.

The action scenes were ok, not great. The film relied on a lot of CG and green screen, which wasn’t ideal, meaning nothing felt realistic. There is a scene where they rescue people off a burning boat and the CG fire is absolutely terrible. The fight scenes used too many close ups and quick cuts, which when you have someone like The Rock, who used to pretend to fight guys in a ring with big wide camera angles, I’m sure he could do it in a movie, there was no need for all the close ups.

It may sound like I hated this movie, which I didn’t, I went in with low expectations and I was neither surprised nor disappointed. I was expecting a cheesy, raunchy, dumb movie, and I got that. The movie isn’t trying to be serious, it knows it’s dumb and it embraces that.

I never watched the show as a kid but if you’re a fan don’t expect to walk out feeling too much nostalgia, because minus the brief David Hasselhoff and Pamela Anderson cameos, and a tiny segment of the classic theme, there wasn’t much. Then again not watching the show I may be wrong.

Overall, my opinion for Baywatch is that it will either be a guilty pleasure for you, or you’ll forget it instantly.