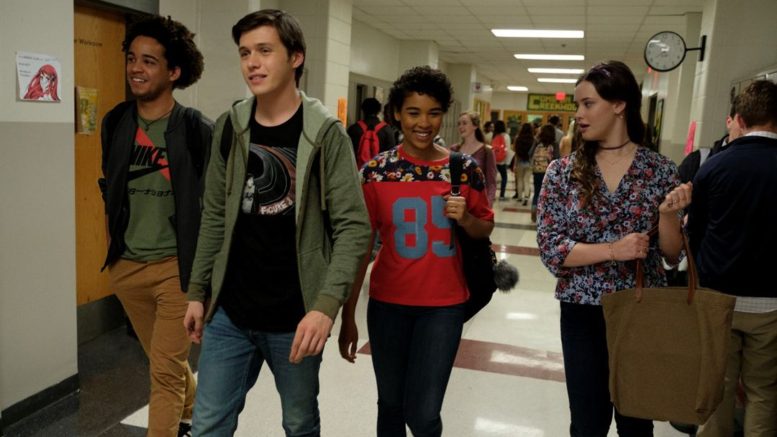 Love, Simon (12A) tells the story of Simon Spier (Nick Robinson) who has a big secret; he’s gay. Unable to come out to his friends or family, Simon strikes up an email relationship with another closeted male, nicknamed “Blue”, which allows him to explore his feelings and fall in love at the same time. But, when his secret is threatened, Simon is forced to come to terms with his identity.

Robinson gave a very good performance. The only other thing I’ve seen him in was Jurassic World and his performance in that was pretty forgettable. In this film he was very believable, he acts like a genuine school kid without going over the top and his connections with his family and friends were portrayed well.

The rest of the cast all do a decent job. Josh Duhamel and Jennifer Garner were good as Simon’s parents and I really liked the little sister Nora (Talitha Bateman). She’s been solid in a few things lately and I think she could be one to watch.

But, my favourite performance came from Natasha Rothwell, who played Ms. Albright. She was hilarious. She was a writer for Saturday Night Live and it shows as she provides a lot of the films much-needed comedy.

The second half of the film is much better than the first as that’s when it starts to take itself seriously, and when the emotional moments kick in they really hit you hard, which were bolstered by great deliveries from those involved.

Where this film lost me was in its first half. It was sloppy and there were a lot of lazy jokes that didn’t land and characters that were just annoying. The vice-principal, for example, was literally only there for comic-relief and didn’t add anything to the story.

This film felt like it was set in the wrong era. It obviously needed to be set in present day to accommodate the blogging/tweeting storyline, but I can imagine in today’s society there aren’t many places in America or Europe where gay people have to stay so silent? I may be wrong.

The fact that the main guy is being blackmailed over his orientation so he has to help someone ‘woo’ a girl sounds more at home in an 80s movie than a movie coming out in 2018. Also, how a fight didn’t break out when the vice-principal took a phone off a kid for texting in the halls baffled me. Not the most believable depiction of a 21st century school.

Overall, Love, Simon was a sweet and engaging film. I am sure it will be very helpful for many gay people to give them the courage to come out. It doesn’t tick all the boxes required for a memorable coming-of-age tale, but I applaud the filmmakers for taking on this theme and bringing something new to the silver screen.