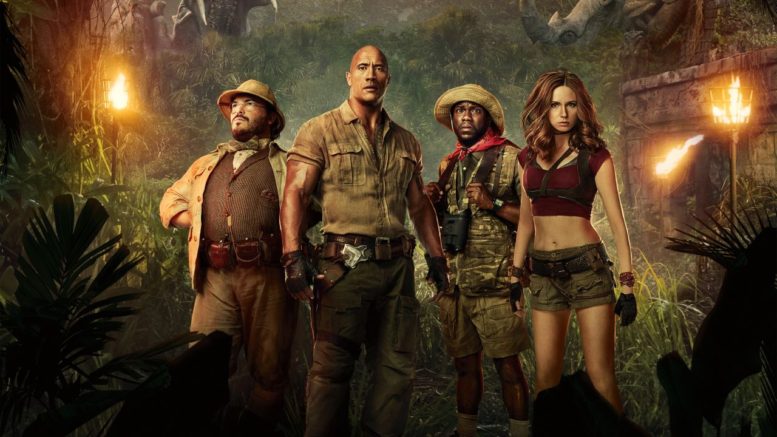 In Jumanji: Welcome to the Jungle (12A) we follow four teenagers who find an old video game and upon choosing their characters, get sucked into the game’s dangerous jungle world. There, they must work together in order to survive and complete the game…only then can they return to the real world.

I have never been more sceptical about a remake/sequel/continuation, or whatever this movie is. But I can honestly say, I was pleasantly surprised by how much fun this movie really is. First and foremost, I loved the idea of switching it up for today’s generation and making Jumanji a video game. In the original we saw the world of Jumanji come to us, now we are transported to its world and the filmmakers get to have a lot of fun with the video game genre.

This movie is very funny for two reasons; the brilliant cast and the video game concept. The four leads (Dwayne Johnson, Kevin Hart, Karen Gillan and Jack Black) have fantastic chemistry and they look like they’re really enjoying themselves. The best part is watching Black play a teenage girl, and Johnson play an awkward nerd (better than his Central Intelligence character).

I don’t think anyone could have done a better job than Black with that character, and it’s where a lot of the great comedy comes from. Johnson is his usual charismatic self and he had some hilarious moments as well. Hart plays the usual Kevin Hart type, fast-talking and sarcastic, and he does it very well. Gillan was a surprise for me, as I’ve only really seen her in Guardians of the Galaxy, but she totally kicked ass, literally. Also, her comic attempts at flirting brought a huge laugh out of everyone in the cinema.

My favourite part of this film was anytime a video game trope was on display as it was tremendously entertaining. It addresses everything gamers know and love or hate including; life bars, strengths, weaknesses, the small backpack that can fit a whole inventory of huge weapons and items in it, the NPC’s (non-player character) that repeat the same lines of dialogue. It was all there, and it was hysterical.

The action scenes were a total blast. Watching The Rock beat down a group of thugs is always exciting and I don’t know how much of it she did but props to Gillan and her stunt double for some thrilling martial arts fight scenes. My only negative was that in the original it was exhilarating to watch herds of animals cause havoc throughout the city, and I would have liked to have seen more animal scenes in this one. However, we did get a cool rhino stampede and jaguar chase, but I wanted more.

Another negative of the film was the villain. I don’t even remember his name he was that forgettable. He was very one-dimensional, like a video game, and while the story isn’t held back by his screen time, it just stood out for me. I’d have preferred it if he had some charisma or something to do, but instead his motivation was just “I will kill you because reasons”.

Overall, Jumanji: Welcome to the Jungle took a big risk by existing as a sequel to a beloved classic but what it does best is evolve the franchise instead of just rehashing the same formula that made the original so good. It has a great cast of hilarious characters all portrayed brilliantly, a lot of comedy and some awesome actions sequences.

An immensely enjoyable action-adventure for the whole family. One thing I will say though…good luck going up against Star Wars at the box office.