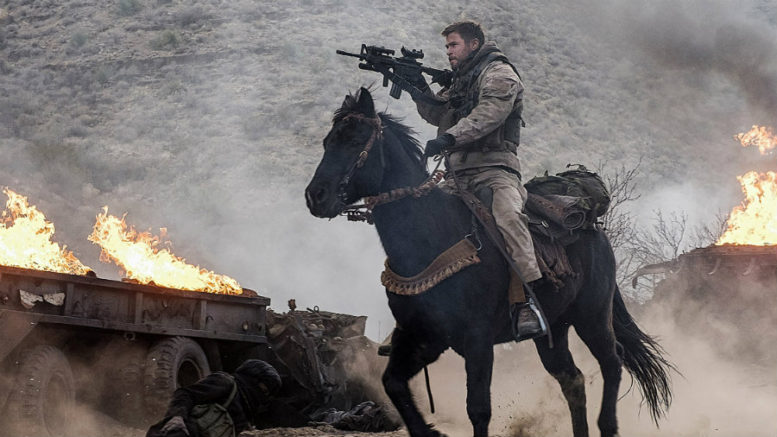 12 Strong (15) stars Chris Hemsworth, Michael Shannon and Michael Pena and it tells the true story of the declassified mission undertaken by the horse soldiers. These were 12 men who were deployed into Afghanistan following the September 11th terrorist attacks. There, they join forces with an Afghan warlord (Navid Negahban) to be the first men to fight back against the Taliban.

If I was to compare this film with another, it would be 13 Hours (2016), they both tell an incredible true story and they both have amazing action sequences.

12 Strong has a lot of gritty shootouts and battle scenes accompanied by amazing camera work. There are long sweeping shots of the horses riding into battle and missiles flying overhead which did a great job of immersing you into this horrifying conflict.

The sound design is particularly impressive with the zip of bullets flying past and whoosh of rockets zooming through the air all doing a great job of making you feel like you are there fighting with these men.

About a third of the way through is when the action really kicks in and when it does it does not let you go. It is relentless for the last hour or so and it is absolutely thrilling, I found myself gripping the arm rests for most of the film.

Hemsworth is very capable as the main lead, Captain Mitch Nelson, he gives a very good performance. Pena provides a lot of the movie’s humour, he plays his normal wise-cracking self, but he does it very well.

But it is Negahban who really shines in my opinion, he plays General Dostum, a man who wants the Taliban gone just as much as the US, maybe even more. His performance was very compelling, and he had some powerful moments of dialogue which were great.

This was an incredible story. These men accomplished a near impossible feat and they received no recognition upon coming home because of it being a classified mission. The true story element was handled well, and it made me have enormous respect for what these guys did.

Some of the other soldiers are weakly written, they are the typical soldier characters you get in these types of movies; they have their usual banter and they exchange witty comebacks frequently, but I wished the film did a little more to make them stand out.

Also, some of the action scenes are a little hard to believe so you will need to have a bit of an imagination because watching Hemsworth lead a pack of horses towards gunfire, missiles and turret gunners, only to have everyone behind him get shot up instead of him was a bit unbelievable.

Overall, 12 Strong was a very entertaining movie and the true story was handled with respect. I hope it doesn’t get forgotten as the months go on because it was a very good January movie.