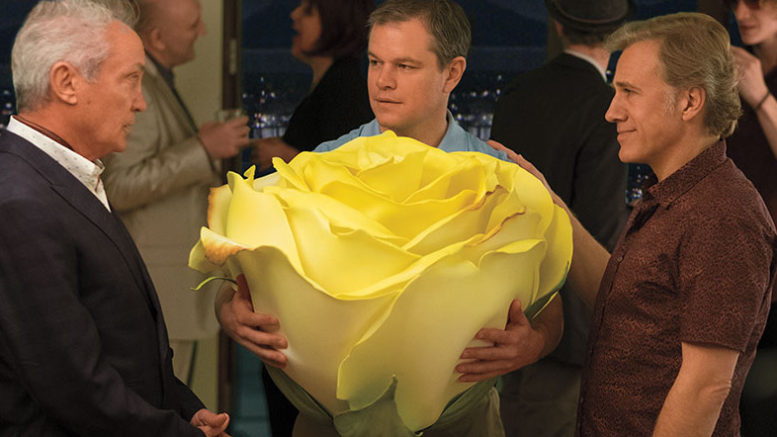 Downsizing (15) is the process in which you shrink yourself down to four inches tall in an attempt to save the planet. In this film we follow Paul Safranek (Matt Damon) as he and his wife Audrey (Kristen Wiig) decide to undergo the “downsizing” procedure in order conserve the Earth and live a wealthy lifestyle at the same time.

If you watch the trailers for this film, you may be misled into thinking this is a straight up comedy. While it is funny in parts, I didn’t laugh as much as I wanted to or as much as the trailer made me believe I would.

When the trailer shows off big comedic actors like Wiig, Jason Sudeikis and Neil Patrick Harris among others, and underuses them in the film it feels like a wasted opportunity. Like I said, you will laugh but most of the time that is thanks to Christoph Waltz.

His laughs felt genuine and were probably helped by not being shown in the trailer, like a lot of the jokes were. Hong Chau is funny at times, and her and Damon do share great chemistry, but the film relies too much on her poor English for humour and it doesn’t always work.

One of the best parts of the film was its concept. A world full of shrunken people living in luxury to save the environment is a very interesting original idea and the first half or so of this movie was brilliant.

Overall, the film was light-hearted, touching at times and made some bold statements about humankind and you really do feel immersed into the world of Leisure Land. The visuals were very creative, and it was funny seeing the typically small items in life enlarged to enormous proportions.

Now where this film lost me was its second half and I’ll try not to spoil anything but there is a shift in tone and it just felt like a completely different movie. Accompanied by a lengthy runtime, resulted in multiple moments where I was bored, occasionally checking my watch to see when it was over.

The biggest draw for this movie will be the concept of “downsizing” but you may be disappointed when the credits roll, I know I was. But at the end of the day, an original idea doesn’t always mean great movie and unfortunately this was apparent in Downsizing.

The film is acted very well all round and while it does have several funny moments, these are few and far between. Unless of course you haven’t watched the trailer before heading to the cinema then in fact you may actually disagree with me completely.