Disgruntled campaigners fed up with the ongoing A27 row say they plan to put up a candidate to fight for the leadership of West Sussex County Council.

Chichester Deserves Better (CDB), who are against plans for a northern bypass around the city, will oppose Louise Goldsmith’s Chichester West seat in the local elections in May.

A CDB spokesman said: “In calling for a re-run of the A27 consultation with northern options included, Louise Goldsmith is not only making a mockery of her own council’s previous stance on the issue, but is also betraying the interests of the residents she represents within her division who have consistently opposed any northern bypass.”

In response Ms Goldsmith said: “There are County Council Elections this May and anyone who qualifies can stand – that is the democratic process. Councillors should be judged on the work they have done for their Communities and will be judged on that by the people I am proud to represent. 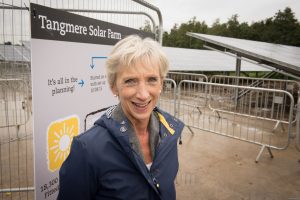 “Like previous West Sussex County Council Leaders, I have campaigned with MPs for improvements to the A27. We do need improvements and that is one statement surely we can all agree on?

“However the A27 Consultation process which ran last year was unsatisfactory having been withdrawn three weeks before commencement and certainly before any quoted letter from West Sussex County Council.

“Chichester Deserves Better states that the affected Parishes of Bosham, East and West Ashling, Funtington, Fishbourne are strongly opposed, although no mention is made of Parklands, which is also in the Chichester West Division and will also be affected too.

“It is now 2017 and I would like to point out that we still do not have the results of the Consultation, something I know many of my residents are keen to see which is why I wrote to Highways England in December requesting the results of the survey be published.”