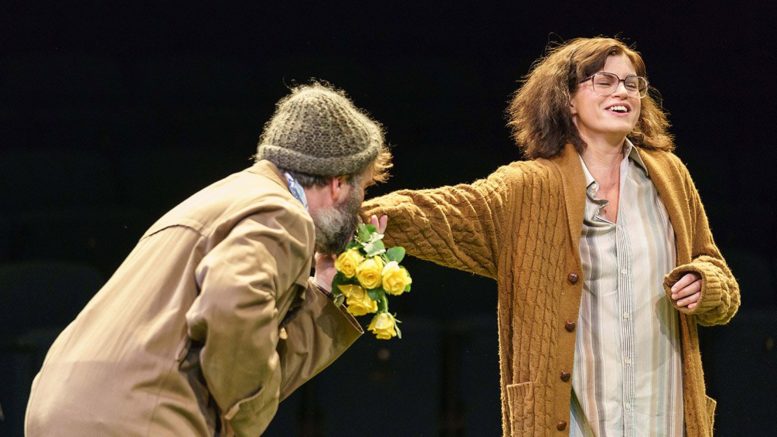 Alan Ayckbourn wrote his trilogy, The Norman Conquests, in the firm belief that there was “no proper order” in which to watch them. Yet, after feasting on all three components, Tables Manners, Living Together and Round and Round the Garden, in one so-called “trilogy day” at Chichester Festival Theatre, I would humbly disagree.

The running order decided upon by director Blanche McIntyre, directing at Chichester for the first time — and in some style, gave us a remarkable opportunity to witness an undiluted telling of these interconnecting plays, written in 1973, by Britain’s most prolific and popular contemporary playwright (he has penned more than 80 plays).

Seen “in the round” for the first time at the venue, The Norman Conquests sees the eponymous, ever-lusty anti-hero’s red-blooded intentions woven skilfully into a rambunctious family gathering at a country house somewhere in Sussex (though not East Grinstead!)

Incorrigible alpha-male Norman (Trystan Gravelle) has more than just eyes on plain-Jane Annie (Jemima Rooper), who just happens to be the sister of his wife, the ravishing, though short-sighted Ruth (Hattie Ladbury).

But he also has designs on prim and prudish Sarah (Sarah Hadland), who is wed to hapless Reg (Jonathan Broadbent). He is the brother of Annie and Ruth. Then there is neighbourly Tom (John Hollingworth), a stoical singleton vet who, though he doesn’t always know it, is brimming with latent desire for Annie (and rather worrying Munchausen syndrome by proxy leanings towards her cat).

Hilarity and high farce ensue as each play examines chaotically-comedic passages in the same time frame but from different aspects; the dining room, the lounge and the garden scenes each reveal new layers of the genuinely laugh-out-loud story.

That Ayckbourn could dovetail the chain of uproarious (though occasionally poignant) events so superbly is testament to his undoubted masterful craft. But plaudits galore must be showered on the ensemble cast for their collective and individual ability to bring the high spirited nature of the human condition to life in such a mesmerising fashion.

In his programme notes, Daniel Evans, the theatre’s artistic director, says he wishes audiences who see the plays in three sittings in one day have a “fully immersive and unforgettable theatrical experience”; and, hats off, that was certainly the case!

If you have to see them one by one, so be it. Just see them.