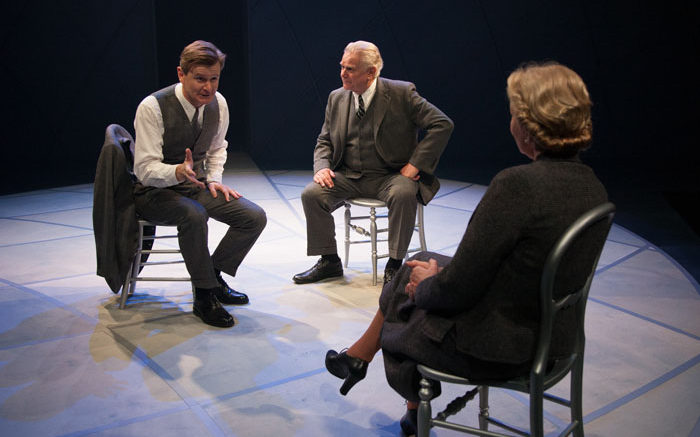 The act of observation changes what’s being observed. That is, says playwright Michael Frayn, one of the implications of quantum mechanics.

And while explaining the nature and behaviour of matter and energy on the atomic and subatomic level, would seem to appear much too weighty a subject on which to base a play, Frayn did exactly that — and did so to much acclaim.

Copenhagen, currently at Chichester’s Minerva Theatre, hasn’t changed with observation. It won praise when it premiered at the National Theatre in 1998, and this revival of the multi award-winning drama, directed by Michael Blakemore, deserves rich praise, too.

In the 1920s they had worked together on nuclear fission and become firm friends. Now, as World War Two rages, they are together once more in Nazi-occupied Denmark, along with Mrs Bohr, and the visitor holds a deadly secret which threatens the very existence of mankind.

Hodge delivers a nuanced performance utterly becoming of her craft and sublimely befitting her pivotal role.

Edwards is excellent as the jittery German genius, skilfully exposing the subtleties of the dialogue. Jesson, as the older and wiser mastermind scientist, perfectly portrays Bohr as he wrestles with his conviction. But just because Bohr is with the Allies, it doesn’t mean his conscientiousness is morally correct. Or is it? Herein is one of the mysteries that need unravelling.

However, there is no mystery to the appeal of this captivating production of Copenhagen. And, better yet, you don’t need a degree in atomic science to appreciate it.