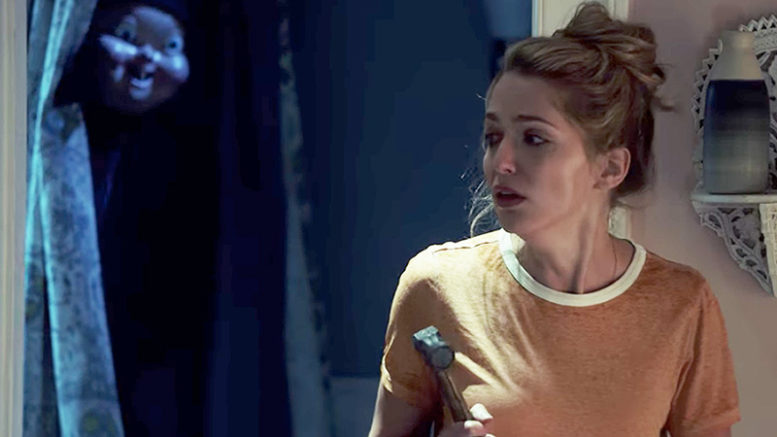 In true Groundhog Day fashion, Tree (Jessica Rothe) must relive the same day over and over again. Only this time, at the end of each day she is brutally murdered. If Tree has any chance of identifying her killer she must keep on dying in an attempt to end the torturous loop in Happy Death Day (15). Can she solve her own murder?

Rothe and Israel Broussard are fantastic as the two leads, they have great chemistry and do a great job in making us root for them. Rothe’s character was a stone-cold b!#@% at the beginning but she’s kind of cool and you like her. But when you see her evolve into a better person it was good to watch but very cliché. She was very funny, cunning, bad-ass and so charismatic that you can’t help but root for her even when she’s harsh to everyone she sees.

I liked the whole idea of mixing Groundhog Day with Scream and the mystery element was very entertaining to watch. I also liked the killer’s design, just a black hoodie and sinister looking baby mask; fairly simple but very effective. It had some good moments of tension and some creepy parts. However, I wouldn’t necessarily call this a horror film, but more of a comedy.

I was quite disappointed with the lack of violence and genuine scares in this movie. Maybe that’s because I’m just coming off binge-watching the Saw franchise, but how can a slasher movie have no blood?! I felt like they went for more comedy instead of scares, for example; they turned what could have been a genuinely scary montage of Tree getting murdered into a series of comedic moments, it totally took away the scare factor.

The twists and turns were good but quite predictable at some points. It does a good job of keeping you guessing who the killer is but it does have some cheesy dialogue and the motivation for the killer was a bit weak.

Happy Death Day was a enjoyable movie with a great lead and some good comedy. The rest of the characters were a bit one-dimensional and it lacked the scare factor. Overall, it was a fun movie and that’s what I think it was going for, so it did its job.